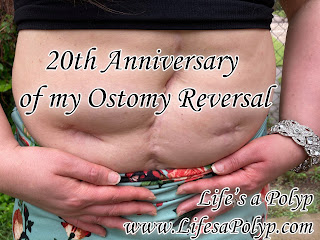 It's hard to believe it, but this is my 20th anniversary of my ostomy reversal!

I had my colon removed at age 9 due to Familial Adenomatous Polyposis. I was expected to have my ostomy reversed into a Jpouch a few months later. However, this is far from what would happen.

I suffered complications from my colon removal resulting in having an ileostomy for 6 years before it would be reversed. My small intestine wrapped around itself and my surrounding organs resulting in my Jpouch dying from lack of blood supply. I required emergency surgery to remove the dead small intestine and move my stoma from my left side to my right side. I would have 5 surgeries that year including one to start a Straight Pull Thru. However, my surgeon refused to complete the Straight Pull Thru reversal.

I experienced a very difficult time trying to adjust to my ostomy. I hated myself, my body, and those around me who I felt I could blame my ostomy on - such as my parents and medical providers. It wasn't until high school when I entered counseling that I was able to start processing the medical trauma I had experienced and learn to cope with my PTSD, depression, and anger. It would still take another decade at least before I felt truly comfortable in my own skin and began to appreciate my body.

Six years after my first surgery, when I was in high school I found a surgeon willing to attempt
completing the Straight Pull Thru. I had longed for an ostomy reversal every day of those 6 years. It wasn't even considered an option until I told my GI specialist that I had been having the urge to have bowel movements in spite of having an ostomy. She explained that this urge was caused by mucus in my small intestine but because I had the urge to excrete it and was able to do so, perhaps a reversal would be possible after all.

My GI specialist and surgeon warned me that while the reversal would be attempted, there was no way to know if it would be successful or not. I may go through surgery only to wake up with my ileostomy being permanent. I didn't care though, I had to try for the reversal.

My parents agreed to give me a thumbs up or down sign as soon as I opened my eyes from the attempted reversal surgery so that I wouldn't have to wait to know how the surgery went. I refuse to talk when I have a NG tube inserted so I wouldn't be able to ask them the outcome. Fortunately, my parents gave me the thumbs up sign and I was able to relax and drift back into my medication induced sleep.

Due to having 6 surgeries by this point, my adhesions started to create a stricture around my small intestine resulting in surgery the following year to remove adhesions. I wasn't sure if this 7th surgery would affect my ability to maintain my reversal or not. I fear of any future surgeries as well due to this risk.

This was my second surgery to remove adhesions and each new surgery creates more adhesions. I now have chronic pain, nausea, and increased risk of intestinal blockages due to my adhesions. I fear that I will require another surgery in the future to once again remove adhesions and place my reversal in risk. Fortunately, my symptoms caused by my adhesions are not severe enough to require another surgery at this time. However, I continue to develop polyps in my duodenum that may require the Whipple procedure at some point.

A Straight Pull Thru and the extended length of time I had an ostomy both have affected my ostomy reversal in general. I have Short Bowel Syndrome resulting in 20+ bowel movements a day. I also often experience urgency with bowel movements that is worsened by not having a rectum and the amount of time my sphincter muscles weren't regularly used while I had an ostomy. In spite of these obstacles, I manage to function well most days and I'm able to participate in the majority of activities of my choice with the aid of anti-diarrhea medications when necessary. Due to my Short Bowel Syndrome, I do have flare ups causing me to require the restroom every minute or so and these flares can last for hours at a time even with anti-diarrhea medication.

I try not to dwell on the possibilities of the future that may or may not occur and instead focus on enjoying the present status of my health. I remain amazed that my Straight Pull Thru has managed so well for me to reach 20 years. I hope for many more years with my reversal. 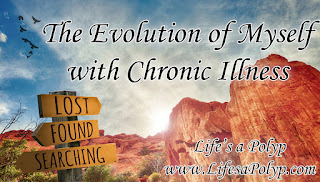 When I look back on my life, I am drastically different now than how I was as a child and even how I was when I started Life's a Polyp in 2012. My views about myself - physical and emotional have greatly evolved over time to culminate in a wonderful sense of self-acceptance. This was not achieved by myself though. It was a painstaking process lasting a couple of decades with immense support of others - including yourself.

As a child, I was painfully shy. I didn't talk to strangers and barely to those I did know but wasn't particularly close with. I didn't start to become social until I forced myself in 7th grade after experiencing bullying the year prior. My shyness was exacerbated by the surgeries I underwent when I was in 5th grade and by having an ostomy. I had no self-esteem and judged myself harshly for the appearance of my surgery ridden body. Truth be told, I hated myself, my body, and those I blamed for my health condition. Changing my social habits wasn't easy but I found it necessary for my emotional survival and so I pushed myself to expand past my comfort zone.

From 7th grade onward, I acclimated to the new, more social self I created and haven't been without friends since. In high school, I was able to have my ostomy reversed. This improved my self-esteem and I was no longer ashamed of the physical appearance of my body. I still wasn't ready to share about my day to day symptoms, particularly my GI issues caused by my rare diseases - Familial Adenomatous Polyposis (FAP) and Short Bowel Syndrome.

My health became unstable after my ostomy reversal resulting in frequently missed days from school
due to illness and hospitalization. I became known around my school for being sick. I had a central line for TPN for about 6 months. My central line was prominently visible as my school allowed an altered dress code for me due to regular clothing causing pain and irritation of the skin around my central line. I even unabashedly showed off my scars. However, in spite of my social acceptance, it would still take several more years before I would have the confidence to share my medical story with others.

In 2012, I found a community page on Facebook for FAP and I interacted with others through this page. The administrator reached out to me and asked me to start a blog about living with FAP. I agreed and Life's a Polyp was born. However, I still was not ready to openly share my medical story so I created Life's a Polyp anonymously. I didn't share my identity at all until a reader from Michael's Mission contacted me about how to grow the impact of Life's a Polyp. With her prompting and encouragement, I finally revealed my identity to the world. She gave me the push I needed to no longer hide in shame of my medical experiences. Over time, I became more and more willing to become an open medical book. I became more open with friends and romantic partners not only regarding my medical past but also my current health issues and symptoms.

This push is what has helped Life's a Polyp expand from a blog to a Youtube channel, a Shop, and enter the world of social media. It has allowed me to have my medical story accepted for publishing in a book and the creation of my own children's book about FAP. 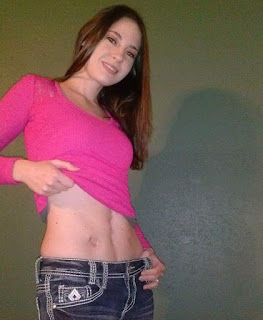 I never would have guessed as that excruciatingly shy young girl that my life would become so public medically. That I would willingly tell others the intimate details of life with FAP and Short Bowel Syndrome. I never would have expected others to be interested in what I had to say or what I experience with these diseases. The readers of Life's a Polyp continue to provide me encouragement to continue my advocacy efforts. I'm not sure when I would have found such a deeper level of self-acceptance about my health conditions and my body if it wasn't for readers such as yourself. With the expansion of social media, I have found an online home amongst others with FAP in groups across various platforms. I never dreamt such acceptance by myself nor by others to be such a possibility.

Our words have a profound impact on others and it can mean the difference between suffering alone and enduring together. If you're struggling with self-acceptance, don't give up hope. It doesn't typically occur over night but each day can mean progress. You are worthy of self-acceptance and love. May we all strive to help one another find self-acceptance.