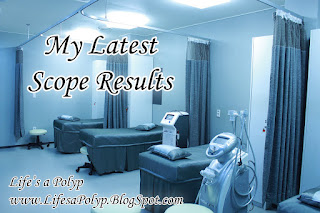 Currently my GI doctor completes upper and lower scopes of my GI tract to monitor my Familial Adenomatous Polyposis (FAP) every two years. In 2015, I started developing duodenal polyps that were precancerous adenoma polyps caused by my FAP and fundic gland polyps in my stomach. I have an intestinal ulcer above my reversal connection site in my small intestine as well that requires monitoring.

Duodenal polyps are a particular concern for those with FAP as FAP polyps often continue to reoccur in spite of removal. I was ecstatic to hear that there were no duodenal polyps present during this scope. These polyps are precancerous and will turn cancerous eventually. The duodenum area for polyp development is concerning due to the risk of requiring a Whipple procedure. No one wants this high risk surgery that results in the removal of the head of the pancreas, the duodenum, gall bladder and the bile duct. My mother required this surgery and it was a very long, difficult recovery for her that nearly cost her life in return and led to the development of diabetes. Additionally, abdominal surgery such as the Whipple, increases the risk of developing a Desmoid Tumor - which FAP patients are already at a higher risk for Desmoids.

I have had several sessile, fundic gland polyps for a few years now. There are several and they are small and in the upper portion of the stomach and are usually benign. However, according to Mayo Clinic, when fundic gland polyps are associated with FAP, they can become cancerous. Sessile polyps are flat, broad based and also considered to be precancerous. Stomach polyps can also cause symptoms of nausea, tenderness, anemia, and blood in stools. These polyps may very well play a contributing factor to my chronic nausea that I started experiencing in 2015. The use of Proton Pump Inhibitors to reduce stomach acid also increases the risk of developing these polyps. I require Prilosec to help reduce my acid reflux and it also seems to help my intestinal ulcer.

I asked my GI specialist if I should change to a different stomach acid controlling medication to further help heal my intestinal ulcer. He advised me that medications, such as Prilosec, focus primarily on the stomach acid and don't really treat intestinal ulcers. My ulcers decreased from 4 to 1 since taking Prilosec yet I'm unable to fully heal my remaining ulcer. This is particularly a concern for me as my ulcer created a hole in my intestine when I was in high school. I went several years later without taking any medication for the stomach acid and without the medicine my one stable ulcer developed into 4 bleeding ulcers. I have to be mindful of my ulcer as it often bleeds to this day, especially when I take Lonox/Lomotil to slow my bowel or if I do not use the restroom for long periods of time. My ulcer actually bleeds less if I use the restroom frequently. My doctor said for an intestinal ulcer that is near the anus, then a suppository or an enema can be used to help treat the ulcer. I am not able to tolerate anything inserted into my anus and therefore this was not an option I could entertain. After my scope was completed, my doctor advised that these would not be a viable option for me regardless as the ulcer is higher in my intestine, above my connection site than he previously realized and it is too high up to be able to be treated with such methods.

Overall my scope results were positive - no duodenal polyps this time, my fundic gland polyps that were biopsied were benign, and my ulcer was stable and also tested negative for Crohn's Disease and cancer.


I go back for a regular check up in 6 months and I will continue my efforts to maintain my health as I await my next set of scopes.
Posted by Jenny at 3:49 PM No comments: 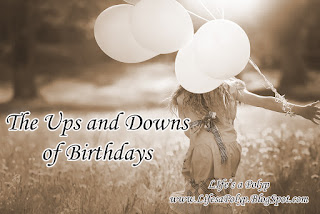 My birthday is a bit of an emotional roller coaster at times for me and has become increasingly difficult for me to enjoy as the years pass by. I shared earlier this year about how my birthday and New Year's start a period of mourning as my fears about the future are intensified. Over time, birthdays have changed from a triumph of survival to a period of mourning.


Since I entered a brief period of depression surrounding my birthday last year, I expected the same to occur this year. I was pleasantly surprised with myself when this didn't occur - at least to the depth of last year's birthday. I struggled in the morning with feelings of sadness and even welled up with tears at times but I was able to fight off the tears and turn the day around by the afternoon. I pushed away my fears about the uncertainty of the future and instead I enjoyed my the birthday lunch my coworkers provided me and appreciated all the birthday wishes from loved ones and even strangers online. I thought I would be in an emotionally fragile state once I got home and asked a friend to spend some time with me. But once again, I surprised myself and was comfortable in my alone time.


Although the sadness I tend to experience around my birthday lessened significantly, I also didn't experience a surge of triumphant feelings about survival either. And that's okay. I was content with a lessening in sadness allowing me to more greatly enjoy sharing my birthday with my loved ones.


Whatever holidays serve has painful reminders to you, may the next be easier. Sometimes our fears and mourning never fully dissipate but they can lessen and we can still enjoy the good times, particularly with others. It can help to utilize coping tools to reframe our negative thoughts to allow us a reprieve.


Here's to an even better birthday next year.
Posted by Jenny at 5:39 PM No comments: