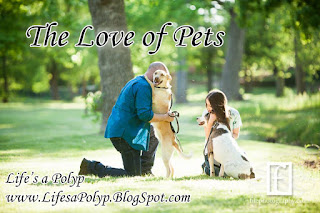 Everyday I'm grateful for my pups. I can't imagine not having them in my life in spite of challenges my health can present in the care they require. There are days that I want to stay in bed or am having a short bowel flare and don't want to move except for when I'm required to run to the restroom for the umpteenth time. They have provided me unconditional love and emotional support without fail. They force me to move when I'm not motivated. I truly feel as though I'd be lost without my pups.


My first real pup that I was solely responsible for was Ruhle, an Aussie mix. I found him at a camp
ground along a river. He ate hot dogs from us for dinner and the next day followed us along the river bank as we canoed down the river. We asked around and he was just a lone campground dog so we took him home. For the entire trip home, he curled up next to my feet in the truck floor bed and was calm as long as he was touching me. My goal was to train him to be a therapy dog and take him to work with me at the nursing home I worked for. He completed three levels of obedience training and obtained his Good Canine Citizen certificate. He loved learning new tricks and loved to perform them. He absolutely loved children and was an incredibly loving pup. When he was 4, we started fostering dogs for the local Humane Society and that's when I fell in love with a little female Carolina Dog and so we adopted her and named her Zia. Ruhle and Zia became extremely close. As he aged, he became like a grumpy old man and no longer enjoyed going to dog centered events. He loved our pup Zia but didn't enjoy other dogs so much anymore. He developed Kidney Disease and he unexpectedly passed when he was 10. Losing him broke my heart and Zia's heart. She wasn't herself without Ruhle so I decided she needed another buddy. I was looking for an older female pup this time, small to mid size, who would get along with Zia well. The female I wanted to adopt was too large and dominant for Zia. Zia is small but all muscle and stands her ground. I wouldn't be able to bear the thought of her fighting and being at risk of being hurt by another animal. And I discovered she does better with male dogs. We went to another shelter and I spotted a medium to large 2 year old male Catahoula mix who
had spots like Ruhle. And I just knew - I needed to get to know this dog. He wasn't what I was looking for at all as a companion for myself and Zia. The shelter let him and Zia out in a fenced yard and they got along well - he was even submissive to Zia. He has a large scar on his hip and a torn up ear. He spent a year in the shelter and is terrified of men. He definitely has a traumatic history but he took to me right away. We took him home as a trial and within a couple of days I knew he was for us. I named him Azriel. He is attached to my hip, is still learning some commands and although he remains scared of men, he has shown the ability to love on male friends of mine if they're patient with him. Zia even acts like she likes him on occasion and will at times run around with him. She no longer acts withdrawn and sullen.


There are plenty of studies showing the physical and mental health benefits of animals. According to Maslow, one of our hierarchy of needs is belongingness and love. Animals help meet this need, particularly for those who live alone. According to the Centers for Diseases Control and Prevention, animals have also been shown to increase fitness and happiness while decreasing stress with lower blood pressure, cholesterol and triglyceride levels, feelings of loneliness and improving socialization and exercise opportunities. Caring for an animal not only provides benefits to physical and mental health but it can also teach responsibility. Studies are showing that the responsibilities of caring for a fish helped teens better manage their diabetes and helped children with ADHD focus their attention. Children who read to animals have also shown an increase in social skills, sharing, cooperation, volunteerism and a reduction in behavioral problems. Children with an Autism Spectrum Disorder have shown decreased anxiety, improved social interactions and engagement with peers from a few minutes of interaction with guinea pigs. Service dogs, Therapy dogs and emotional support animals have for a long time demonstrated how helpful an animal can be physically and emotionally.

A pet is not necessarily for everyone. When considering adopting an animal, one needs to take into consideration the financial and physical requirements a pet will demand. Some pets may be less expensive in their maintenance and care than others. A high energy animal may not be the best idea for everyone. Housing and outdoor access will vary from animal to animal as well. Who will provide care to your pet if you travel or are unable to care for your pet for a period of time?


We can receive companionship from all sorts of animals though so if a dog or cat is not a particularly good fit, perhaps a different animal would be such as fish, rabbit, bird, hamster, etc. If you're interested in adopting an animal but unsure what may be the best animal for you, talk to someone at a rescue group, shelter, veterinarian clinic, or pet store such as Petsmart or Petco.


Another great option that is an alternative to the lifelong commitment of a pet is to foster for a local shelter or rescue group. Fostering allows a shelter/rescue to free more space for another animal in need, provide a temporary home to an animal and one can still benefit from the companionship of an animal while in their care until they've been adopted. Additionally, volunteering at a shelter/rescue group is another great opportunity to benefit from the care of animals with limited responsibility and is a much needed source of help to such organizations.
Posted by Jenny at 2:16 PM No comments: 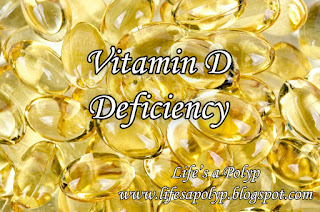 I remember in high school my doctor told me I was low on Vitamin D and to try to go out in the sunlight more. It wasn't suggested that I start taking a Vitamin D supplement until about a year ago when I complained of my struggle with my chronic fatigue to my adult GI doctor. He decided to draw lab testing various elements other than just my Iron and B12. This time he checked my Folate, Vitamins K and D to be on the safe side. Following the results, I was directed to start taking Folate and Vitamin D to bring them back into range and help combat my chronic fatigue. I was started on a high dose of 50,000 IU a week of Vitamin D for a couple of months with my level to be rechecked. With improvement to my Vitamin D level, I was able to change to 1,000 IU daily to maintain my level improvement and I was able to find this amount over the counter at a local grocery store in the pharmacy section.


It seems as though it is a lot easier to be deficient on Vitamin D than one may realize. We process Vitamin D through sunlight, diet, and supplements but we often are not in the sun enough to maintain adequate Vitamin D due to a variety of reasons such as season, cloud cover, air pollution, skin color, and location to equator and there are a limited number of foods with Vitamin D. There is also the risk of skin cancer with prolonged sun exposure to consider. So it may be likely that a supplement needs to be added to one's daily regiment in order to maintain an appropriate Vitamin D level.


Vitamin D acts as a hormone that functions in the intestine, kidneys, and bone to help stimulate transport of calcium and phosphorus to reduce the release of the parathyroid hormone that reabsorbs bone tissue. Both functions help us to build and maintain strong and healthy bones. Calcium and Phosphorus are both minerals that serve important functions and can be dangerous at too high or too low of levels. Calcium also needs Vitamin D for proper absorption. Vitamin D also helps maintain our muscle function and immune system to fight off illness and infection. Some studies suggest Vitamin D may also help to prevent cancer as well as other diseases such as diabetes, heart disease, high blood pressure, dementia, and multiple sclerosis. Vitamin D is essential to help protect bones from becoming too thin, brittle, or misshapen as children are at risk of rickets and adults are at risk of osteomalacia and adequate Vitamin D can help prevent osteoporosis in adults as well.


Infants who are only breastfed are at risk of Vitamin D deficiency as breast milk contains a small amount of Vitamin D. Therefore, the American Academy of Pediatrics recommends breastfed infants be given a liquid multivitamin or 200 IU daily for their first two months of life and 400 IU afterwards until they are drinking formula or milk that are fortified.


Your doctor can easily check your Vitamin D level with a simple blood test and recommend if you need higher or lower amounts of Vitamin D. The Institute of Medicine recommends for the average adult under the age of 70 to intake 600 IU a day and 800 IU a day if over 70. Some professionals suggest these recommendations remain too low for what is actually needed.


The body may have difficulty absorbing or processing Vitamin D due to issues such as:
There are medications that may also lower Vitamin D level such as:
Signs of low Vitamin D include:
It's important to have your doctor monitor your Vitamin D level not only to ensure that you're obtaining enough Vitamin D but also to prevent too high of a Vitamin D level.
High Vitamin D can cause:
Vitamin D supplements come in two forms - D2 and D3. D2 comes from plants and requires a prescription whereas D3 is the form that is made by the body when the skin is in contact with the sun and is found in animal sources. D3 is available over the counter and is more easily absorbed and lasts longer in the body from dose to dose.


Even if you are not exhibiting signs of Vitamin D deficiency it can be helpful to request a Vitamin D level check just to be on the safe side.

Counting on the Best

In honor of the year closing and the tradition of new year's resolutions, look back on the year and consider what you would like to b...