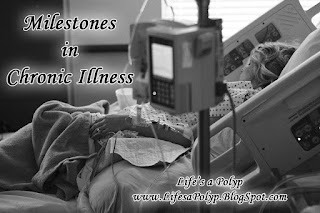 Living and coping with a chronic illness from a young age pushed me into a level of maturity my peers wouldn't reach for decades. The responsibility of taking care of my own health, appointments, medications, diet, and more aren't typically tasked by most individuals until they reach at least young adulthood and if in good health, even years afterward. In my young years I learned a multitude of lessons providing invaluable skills and values to last me a lifetime. I learned perseverance, ambition, how to thrive and survive, hard work, responsibility, compassion, empathy, health intelligence, my body, fear, distrust, hopelessness, and anxiety. It is these last lessons that became so ingrained within my psyche that I was left with Post Traumatic Stress Disorder and emotionally crippled, fixated in an inability to mature and grow to complete independence and trustfulness. During health crises, I would regress to a child like state and mentality filled with terror.

Due to this fixation, I remained with the same doctor, a pediatrician for 20 years. My parents are always available to help support me through my health issues and in the past I required 24 hour care while in the hospital. I feared being alone and I feared doing too much myself while hospitalized due to pain and risk of increased pain. For example, I usually require multiple tries for an IV and once successful  I refused to move my IV arm as I learned that increased movement causes the IV to require replacement faster and I typically required a new IV at least once per hospitalization. I was rarely left alone due to the combination of lethargy, pain, fear, and difficulty completing tasks.

After 8 years of stabilized health and no hospitalizations, my streak ended. I was unexpectedly faced with multiple challenges I've been dreading for years in addition to hospitalization. I am in the process of obtaining an adult GI doctor and my doctor has been out of the office due to her medical assistant's death. As a result, I didn't really have a doctor assigned to follow me and provide orders when I suddenly required an adult GI doctor. 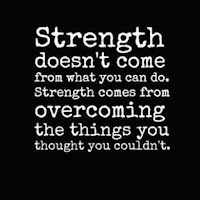 Due to ongoing depression, I restarted taking Zoloft medication and began experiencing lack of appetite. I was surviving on primarily cheese and crackers for 1.5 weeks. During this time I became dehydrated and Wednesday morning my blood pressure bottomed out to 88/58 resulting in near fainting. I fell backwards and hit my head at work. My coworkers forced me to the ER. My stubborn self wouldn't have gone to the hospital had I fallen anywhere other than work and  my coworkers knew it. I happened to be having a GI bleed this day as well - a normal monthly event for me. I was to be released from the ER after receiving fluids and I was scheduled an appointment with my to be  new GI adult doctor for the next day to be followed by a scope. As I was leaving the ER my blood pressure bottomed out again and this time I would remain in the hospital for four days. The hospitalization would lead me to new milestone achievements in my level of maturity. I was given a new IV without any tears this time. After I settled into my room, I sent my mother home and I spent the majority of the days and throughout the nights on my own. I provided my own care, even taking a shower. I received upper and lower scopes - my first ever scope with my pediatric GI doctor to be present. I require general anesthesia for scopes as I wake up otherwise and I have a preferred anesthesiologist who my pediatric GI doctor always tries to schedule with due to my level of comfort and trust with this particular anesthesiologist. These scopes would be performed with another anesthesiologist and a partner of my new adult GI doctor. I was anxious regarding the anesthesiologist and although I previously visited with the GI doctor and felt comfortable with him, I was overcome with anxiety and tears in the procedure room. The anesthesiologist and nurses provided reassurance and I quickly drifted off and awoke in the recovery room. I was informed that I have a few stomach polyps and four ulcers in my ileum and biopsies would be performed to test for cancer and Crohn's Disease. The GI doctor explained that ulcers in the small intestine are common in Crohn's and would like to cover all bases in my care. At my last scope in 2007 I had polyps in my stomach and small intestine. It was at that time my pediatric GI doctor gave the prognosis of developing stomach cancer by age 30. I'll turn 30 in just over one month. I anxiously await the result of my biopsies.
That night I ate my first solid food since prior to the hospitalization and that night I suffered the consequences of severe diarrhea and pain. I was given morphine for the pain and experienced negative side effects including intense nausea and intoxicated symptoms. After receiving Zofran, I required Phenergan to stop the nausea. The following day another partner of my new adult GI doctor visited with me and released me once I felt ready, stating he understood that I know my body and what I need better than any of the doctors.

I was discharged and I'm still coping with the inability to eat very much food due to severe pain. This is similar to how food affected me after my surgeries in high school. It took years for my body to adjust to food and only experience intolerable pain after large or rich meals. I'm extremely frustrated with this return to debilitating pain with any amounts or types of food but am taking it a moment at a time to readjust and resume my normal eating habits.

I made it home with my health, sanity, and a lot of milestones to be proud of. I survived a hospitalization without constant care, stayed the nights by myself, without my pediatric GI doctor overlooking my care, my first scope in 8 years, and changed doctors. I truly dreaded all that was to come about during this trial but I survived and am filled with a sense of hopefulness, relief, and pride. I can't believe I made it through especially with minimal difficulty and only brief PTSD symptoms.  I've been frightfully dreading these milestones for decades and all in one week I finally surpassed each one. Reaching a new level of health maturity has provided me confidence in my ability to face future hospitalizations, procedures, and changes.

Celebrate your milestones for each takes thousands of small steps
to reach that moment in your life. 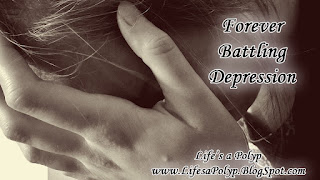 Depression has settled into my life uninvited like a tag along side effect of chronic health issues. It enters and leaves me with little warning at times, the triggers barely recognizable to others. But I notice them. It's a battle that has been waged for nearly 20 years now, beginning with my first year of surgeries. The medical trauma I endured left a mental stain upon my psyche, a reminder of what transpired and what I wasn't able to escape. It accompanies the Post Traumatic Stress Disorder that has been quietened over the years but remains lurking in the dark waiting to be resurrected at the most unwelcomed times once triggered. Together they lie at the edges of my life, waiting for entrance cues.

"DEPRESSION IS SUCH A CRUEL PUNISHMENT. THERE ARE NO FEVERS, NO RASHES, NO BLOOD TESTS TO SEND PEOPLE SCURRYING IN CONCERN, JUST THE SLOW EROSION OF SELF, AS INSIDIOUS AS CANCER. AND LIKE CANCER IT IS ESSENTIALLY A SOLITARY EXPERIENCE; A ROOM IN HELL WITH ONLY YOUR NAME ON THE DOOR." - Martha Manning, Undercurrents
Read more »
Posted by Jenny at 6:16 PM 2 comments: