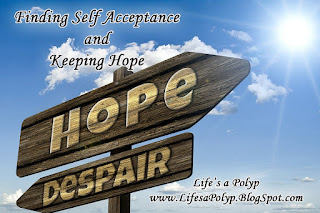 This year marks 19 years since my first surgery, the surgery that resulted in a "permanent" ostomy for six years, making it 13 years since my ostomy was reversed. Although neither is a milestone anniversary and I tend to always forget about the anniversaries anyway. But occasionally my mind is lingers to think about the amount of time that has passed.

When I had my ostomy surgery I was told that it would only be a temporary ostomy and after three months to allow healing, I would have a jpouch in place of the ostomy. As I've discussed in previous posts, this obviously didn't occur according to plan. Due to complications, I wound up with a "permanent" ostomy. I was told there wasn't enough rectum left to be attached to my intestine. My rectum was kept in place though in spite of having a "permanent"ostomy. I never had any pain or issues with still having a rectum and I'm so grateful it wasn't removed.

I experienced a lot of anger and denial after the complications started. I hated my doctors, surgeons, hospital and even my parents. I wanted them to all pay for what they had done to me and through a series of life events I was consumed by the rage and became suicidal and homicidal for several years after that first surgery. I never accepted my ostomy. Deep down I knew I wasn't meant to have an ostomy for the rest of my life. I believed it fervently, I hoped for a miracle obsessively.

After six years, all of a sudden, after a routine colonoscopy my doctor thought that there may be enough rectum to attempt a straight pull thru and referred me to a surgeon for consultation. I could hardly contain myself. It was a long shot, but I had to take it. My life was about to change with the sudden option for reversal. I was terrified I'd wake up after surgery to find out it had been a failure. My parents agreed to give me a thumbs up or thumbs down as soon as I opened my eyes so I would know the result. I didn't know how I'd react if it was a thumbs down, I feared I'd break down immediately and cause my physical pain to increase. I couldn't wait to find out though. Fortunately for my mind's sake, it was a thumbs up and I was able to relax and drift back into a drug induced sleep.

Not everyone reacts or copes with having an ostomy the same way. Ostomies are life saving and can greatly improve quality of life. An ostomy is nothing to be ashamed of and the improvements to ostomies over the years has been amazing to truly make living with an ostomy very good. In spite of this though, some of us have an extremely difficult time with acceptance. I was one of those people and fortunately for me, I was able to have my ostomy reversed. For me, that's what I needed because I was fixated, trapped in a world of rage. I hope that had it been a thumbs down that I would have eventually been able to find self acceptance and lived with the love of life and dignity of so many ostomates I know and admire.
Posted by Jenny at 7:24 PM No comments: 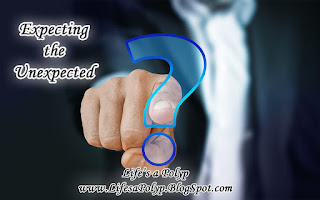 Familial Polypisis information, awareness and groups are spreading and growing like wild fire since I was a kid. People outside of bowel disorder groups still don't really know about us, but so many more within such health groups do. As a kid, I only knew one person outside of my family with this disease. Because of that, I've always felt a special connection to every FAPer.

I've mentioned in an earlier post that my mother, grandfather and likely some of his siblings were also FAPers. I didn't really understand what that many until I was diagnosed. Before that I knew what an ostomy was and how to take care of one and how to live with one by watching my mother and grandfather. I knew they both had cancer and were doing better now. I didn't know I'd be joining them or there was that risk. But I don't think my parents really knew either or at least didn't expect me to be diagnosed in grade school but thought it might be something I'd have to be tested for as an adult. After all, that was when it hit my mother and grandfather. Even after I was diagnosed, we didn't expect me to live with an ostomy for six years. The surgeon had prepared us for just three months until everything went terribly wrong.

Through all the growing FAP groups I've gotten to know other FAPers and it always amazes me when I come across someone and they were the first one in their family to develop the mutated gene. I definitely didn't expect any if this for me but I also wasn't completely unprepared due to having family members with FAP and ostomies. I can't imagine being the first in my family and to be the one who figures it all out, endures it all and potentially prepares their future generations for what may be heading their way. Although it would also be nice to know that no one prior had to go through FAP, perhaps it will end with you if your children are the lucky 50% and living without the fear or stress prior to being diagnosed.

As I've discussed before, my goal is to end my family's cycle of FAP, even if that means I have no children myself. But I think a lot of that comes from seeing how its ravaged my family through the generations and I'm the last born to have been diagnosed, my aunts and cousins have all been cleared. Perhaps if I was the first diagnosed, I wouldn't be obsessed with being the last.

There's definitely advantages to both the expected and the unexpected, it just depends on your response. And even when we do our best, we're never completely prepared. We just do our best with what we know.
Posted by Jenny at 7:49 AM No comments: 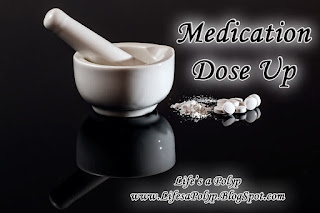 It's amazing how the body changes its reaction to substances it has processed for years. You think you'll react on the same old way until one day it's not quite the same and nor is the next day and so forth. I've experienced this with food in drastic ways but also medication. I mentioned before during a Medication Mix Up that I discovered that my body was able to once again handle the generic for Lomotil and I only required one pill instead of four.

After a year my body started to become immune again. And after a lot of resistance, being my usual stubborn self, I finally gave in and upped my dose to two pills a day. And oh my goodness the difference! I wish I hadn't been so stubborn and waited so long, thinking it would just get better, that I just needed to wait to eat until after an activity. Sure, I still have the issues and consideration I always have when dealing with food and activity but with a slightly increased dose those considerations are once again reasonable. I've been able to exercise daily this week! That alone is a huge deal for me as any exercise stimulates my SBS.

So I've learned my lesson. Sometimes change isn't bad, sometimes it's good to admit something isn't working as well as it once had and that's okay because sometimes the change is just what we needed. Change doesn't have to be a step backwards, it can be the step in the right direction we've been seeking.
Posted by Jenny at 8:00 PM 2 comments: