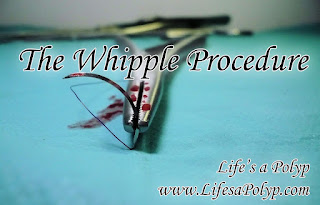 If you're within the Familial Adenomatous Polyposis (FAP) community, you likely know at least one person who also had the Whipple Procedure. Due to the high precancerous polyp growth associated with FAP, it is common for FAP patients to also develop polyps in their stomach including the duodenum, the area that leads from the stomach to the small intestine. Often these polyps become too large and will block this opening or turn cancerous. Often the polyp(s) can be removed during an EGD procedure but sometimes require surgical removal resulting in the Whipple Procedure. Another common procedure due to a polyp blocking the bile duct is the ERCP (endoscopic retrograde cholangiopancreatography) that results in a stent placement to keep the bile duct open after polyp removal.


The Whipple Procedure is also called a Pancreaticoduodenectomy. This surgery removes the head of the pancreas, the gallbladder, duodenum, and a portion of the bile duct and stomach. In some cases, the stomach is not removed and this modified version of the Whipple is called a pylorus-preserving Whipple. The remainder of the pancreas, stomach and small intestine are then reconnected. The surgery in both instances typically requires 5-7 hours to perform.


Due to the complexity of this surgery it can take months to a year for someone to fully recover and feel like themselves again. With the removal of part of the pancreas, diet changes may be required to help reduce symptoms of diarrhea, gas, and stomach pain and may require medication to help with digestion and reduce acid.


My mother required the Whipple Procedure 13 years following the removal of her colon with a permanent ileostomy due to colorectal cancer as a result of FAP. She had a polyp obstructing the opening of the common bile duct that caused a backup of bile and frequent pancreatitis. My mother had a difficult recovery and due to her high level of pain from the surgery became addicted to pain medication for a brief period. The pain medication addiction only worsened her recovery as she was unable to obtain the rest she needed. Soon after her Whipple, she was diagnosed with Type II Diabetes due to the removal of part of the pancreas and she now requires insulin. Years after her Whipple, she began requiring Vitamin D and K on a regular basis. In early 2020, she required an ERCP stent placement due to recurring polyps and scar tissue at the reconstructed bile duct.

The Whipple Procedure is a demanding, risky surgery that no one wants to require but it can be life saving. However, with routine monitoring of polyp development one has increased prospects for the best treatment and health outcomes possible.
Posted by Jenny at 5:33 PM