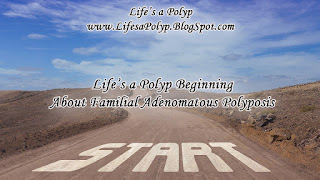 For those of you that are new to the world of FAP, you must first understand the genetic disease.

Briefly, Familial Adenomatous Polyposis is a rare hereditary genetic mutation on the APC gene that predisposes an individual to colon cancer due to hundreds to thousands of precancerous polyps developing in the colon at an early age. Those with FAP develop significantly more polyps and at an earlier age than those without FAP. If the FAP polyps are not treated, the individual will inevitably develop colon cancer. Due to the autosomal dominant hereditary nature of FAP, the offspring of an affected individual has a 50% chance of inheriting FAP.
There are associated manifestations of FAP as well. These include:

FAP is sometimes referred to as Gardner's Syndrome. This was described as a variation early on, prior to the level of understanding about FAP that is now known. FAP mutation on the APC gene has been associated with mutations between codons 178 and 309, between codons 409 and 1,580, corresponding to exons 5-8, 9-14 and the first half of the large final exon.
Attenuated FAP is a variation characterized by a significant risk for colon cancer but fewer colonic polyps (average of 30), more proximally located polyps, and diagnosis of colon cancer at a later age; management may be substantially different. AFAP mutation on the APC gene is usually associated with mutations at the extreme 5' (before codon 157) and 3' (after codon 1,595) ends of the APC gene, and in the alternatively spliced region of exon 9 (codons 213-412).
If a brain tumor occurs in someone with either FAP or a hereditary non-polyposis colorectal cancer condition, then it is known as Turcot Syndrome.
To learn more about Familial Adenomatous Polyposis visit these resources:


Now that you have some understanding of FAP, may I introduce my history with FAP.

I was diagnosed with FAP around the age of 8. I first began to have severe stomach pains. My parents consulted my PCP and requested a referral to a GI specialist repeatedly. I was dismissed as a "whiny child" until my parents prevailed and I came under the care of a pediatric GI specialist, whom continued to follow me for 20 years. I was pre-ulcerous due to stress and she uncovered family history of FAP and began monitoring my health for polyp development. I also had supernumerary teeth or extra teeth that appear in addition to regular teeth. I had about 6 extra teeth that had to be surgically removed. It was not until I was in college that my parents and I learned the extra teeth were associated with FAP.
At age 9, I underwent a total colectomy under the recommendations of specialists due to precancerous FAP polyps beginning to turn cancerous in order to prevent full development of colon cancer. The plan was to have a temporary ileostomy that would later be "taken down" after recovery ending with a jpouch. However, I suffered several surgery complications resulting in the removal of the majority of my small intestine and a permanent ileostomy. This led to my second rare disease diagnosis, Short Bowel Syndrome. During the span of this year, I underwent 5 surgeries and experienced several near-death experiences.
At age 15, I came under the care of a different surgeon and with consultation of my GI specialist, I underwent a 6th surgery to take down the ileostomy and was given a straight pull-thru. The following year, my health unexpectedly began to rapidly decline and I again was not expected to live. After repeated, extensive testing I underwent my 7th surgery to remove excess scar tissue that was causing a stricture around my intestine. Over the next 5 years, I continued to struggle with my health with frequent hospitalizations and ongoing medical treatments to re-establish my health.
In 2021, I underwent my 8th surgery to remove adhesions for the 3rd time and remove my gallbladder due to being precancerous from FAP and full of gallstones.
Currently, I am enjoying a reasonable level of health. I continue to experience very hard, trying days but my health has stabilized for the most part and I am able to pursue the majority of activities and goals with accommodations.

I hope you'll join me on this journey with FAP and will gain information, understanding, and support.
Updated 10/2022
Posted by Jenny at 9:57 PM