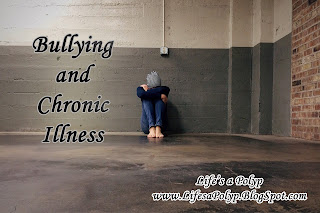 Living with a chronic illness is an intense stress and burden upon one's self and when it is coupled with resulting medical trauma, it is a recipe for mental health concerns regarding adjustment and coping. When you add a young age and bullying to the mix, it can be disastrous.

I always thought that my morbid death orientation and twisted sense of humor stemmed from the medical trauma I endured as a child. I was partly correct. During my own soul searching, I had an epiphany and realized my obsession with death didn't really exist until I was bullied during my 6th grade year - two years after my first surgery. 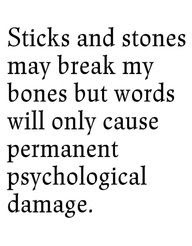 I had my first surgery at the end of my 4th grade year. Over the course of a year I would survive 5 surgeries and a near death experience and develop PTSD. Far from the expected two surgeries I was scheduled to have to place a temporary ileostomy and then reverse the ileostomy with a jpouch by the end of the summer break. I was home schooled during my 5th grade year due to my unstable health and frequent hospitalizations. As I prepared for my 6th grade year, I was malnourished and my doctors diagnosed me with relative anorexia. I was placed on a weight gaining diet and began to stabilize physically. As I recall, I was beginning to mentally survive as my PTSD was calming down with the reduction in medical procedures. I was adjusting the best I could to my unexpected ileostomy that was believed to be permanent. However, I was anxious to start back to school, particularly as 6th grade meant middle school - a new level without a transition and I had lost contact with the majority of my grade school friends during my year of absence. I wasn't psychologically ready for this change and I pleaded with my parents for an alternative. My parents opted to transfer me to a different school district that still held 6th grade in the grade school to allow me time to acclimate to returning to public school. In the end, this was a great decision as I would come to enjoy my school district and experience a challenging education with fantastic teachers that would prepare me well for college and a large group of close friends who supported me in my future health issues during my high school years. Unfortunately, this end result would require me to survive a very difficult time first.

My 6th grade year started off well. I was the new kid in school and painfully shy. I had no sense of fashion or style. I wore baggy pants and long, oversized t-shirts frequently to fit my level of comfort with my new body. I was uncomfortable wearing anything that might give away the presence of my ileostomy. I was introduced to a group of girls and was accepted. I managed to make several friends and all was going well.

That is, until winter break ended and I returned to school to find myself shunned by everyone I knew except for two girls - who were not in the circle of girls who orchestrated the shunning. Unfortunately, I didn't have classes with these two girls very often if at all and so I was left to myself the majority of the time. I was bullied relentlessly for the remainder of the school year. The bullying was led by two girls in the previous circle of friends I had enjoyed. I was never given an explanation for why my previous friends had shunned me and told others in our grade to shun me as well. I began to spend my recess in the classroom with my home room teacher as it was lonesome to play by myself outside everyday and one of the girls would often hit me in the head with objects such as hand sized rocks or hard plastic lunch boxes. My days were spent simply trying to survive so that I could return to the safety of my home.

The combination of this bullying with the medical trauma I had experienced within the previous two years was too much for my childhood self. I was no longer able to maintain coping and I became consumed by hate and anger. I was angry at my classmates for bullying me, at my parents for my disease, health, and for giving birth to me, and at my medical providers for my ileostomy and near death experience. I no longer was learning to cope and adjust to a life with an ostomy. My coping mechanisms became an obsession with death - my own death and the death of those I despised. Quite frankly, I became suicidal and homicidal. I prayed for my death and the death of others everyday for hours while fantasizing about our deaths, planning and plotting how I could bring about death. I had opportunities I could have taken to enact my devious plans. And yet, my health saved me and others from myself.

I managed to stay out of trouble during adolescence thanks to my health. My health made me timid in many ways and helped narrow my chances for typical adolescent mischief. I was too often ill or felt inhibited by my health to partake in high risk behaviors or activities. This inhibition coupled with my logical mind kept me from harming myself or others. Not only did I joyfully envision the demise of myself and others - I also envisioned the repercussions of such devious actions. Knowing the likely consequences that would occur if I acted upon my devilish desires kept me from harming anyone.

﻿ The effects of bullying was far reaching for me that could have resulted in disaster for myself and those around me as well as their loved ones if it wasn't for my own ability to logically think through my thoughts. Unfortunately, this isn't the case for everyone who is bullied. Far too often individuals are completing their suicidal or homicidal desires causing great devastation. In the age of technology, bullying is growing, reaching vast audiences and victims.

FAPVoice launched a survey to determine the prevalence of bullying among their community members. I was heartbroken to read the stories of others' experiences. It's become common to hear about bullying within schools. I didn't expect to hear about bullying within the work place or from medical providers and family though in regards to chronic illness. I was particularly bothered by the story of one individual who felt bullied by her family and medical providers due to her medical decisions.

The sad fact is that we can encounter bullying anywhere and from anyone. But there are things we can do. We can stand up for ourselves and for others. We can reach out, understand, and educate.

Consider joining forces with anti-bullying groups and campaigns, such as No Bullying - a global source for education and support to stop bullying.

Regardless of your age, your place, your role or your avenue. You can make a difference.
Posted by Jenny at 9:24 AM