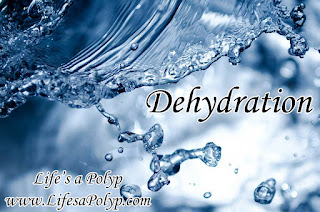 Dehydration occurs when more water is lost from the body than the amount of water that is taken in.

Dehydration is a common struggle for those of us who have required colon removal. Without the colon, water is not absorbed properly and typically results in liquid stools. Many of us without a colon are also diagnosed with Short Bowel Syndrome. SBS further worsens the absorption of nutrition and water due to damage to or significant removal of the small intestine resulting in frequent diarrhea. Some individuals with SBS require lifelong TPN in order to meet their nutrition needs.

I was diagnosed with Short Bowel Syndrome as a child after part of my small intestine died from surgical complications of my colon removal. My SBS causes me to have a minimum of 20 stools in a 24 hour period - more if I am having a flare up. During a SBS flare, it is common for me to use the restroom as frequently as every 2-5 minutes for several hours at a time.

It is common for those with an ileostomy or Short Bowel Syndrome to experience stools soon after ingesting liquid further complicating our ability to take in adequate amounts of water.

Later, when I was in high school, it was discovered that I had a hole in my small intestine. As a result, I was placed on an NPO diet and started on TPN for my nutritional/hydration needs. I became accustomed to not drinking fluids due to the NPO diet while my intestine's hole was healing. I began to only drink fluid when I felt thirsty, which wasn't often. As an adult, I started being followed by a nephrologist a few years ago due to the discovery of cysts on my kidneys. While this could mean that I have Polycystic Kidney Disease, my nephrologist thinks it may just be due to years of dehydration. This has prompted me to truly make an effort at achieving and maintaining a state of hydration. In spite of my efforts of at times drinking 100+ ounces of water a day, my nephrologist states I remain in a dehydrated state.

For those with colon cancer causing conditions such as Familial Adenomatous Polyposis or Lynch Syndrome may also experience dehydration worsened by cancer treatments. Chemotherapy and radiation treatments may cause side effects including diarrhea, vomiting, and excessive urination that may result in dehydration.

My Nephrologist advised me that becoming hydrated requires several days - nearly a week - of continuous increased fluid intake for the body to fully become hydrated. One or two days of drinking well isn't going to be enough.

What are the signs of dehydration?

Common signs of dehydration include:

Severe signs of dehydration include:
Risks of Dehydration
If dehydration is severe and not rectified, an individual may experience:
Diagnosing Dehydration
Several physical factors may be examined in addition to laboratory tests to identify common electrolyte changes associated with dehydration may be utilized for diagnosis. This may include:
Treating and Preventing Dehydration
The U.S. National Academies of Science, Engineering and Medicine recommend men to drink 15.5 cups and women to drink 11.5 cups of water a day. It's recommended to limit or avoid caffeinated drinks.
An individual may need to adjust their daily water intake due to exercising, environment, overall health, and if they are pregnant or breastfeeding.
IV fluids may be required for severe or recurring dehydration. This is common for those with malabsorption issues.
There are several hydration products available to help prevent dehydration. Simply search for hydration drinks. Compare the amount of electrolytes and sugar in a drink when shopping. Some hydration products include: