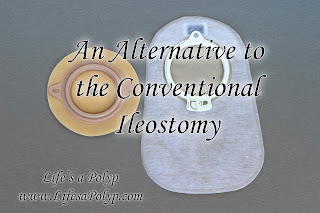 If you're like me, you haven't heard a lot about different ostomy options for colon removal. Individuals frequently hear about the typical ostomy option - the ileostomy (even though many incorrectly refer to ileostomies as colostomies thinking colostomy is the general term for an ostomy). The conventional ileostomy has an external stoma with a wafer and pouch system and involuntarily releases gas and feces into the pouching system worn over the stoma. However, there is another kind of ileostomy called a continent ileostomy that is created internally allowing for gas and feces to be eliminated by inserting a catheter through a stoma into an internal pouch or reservoir that collects gas and feces.

The first continent ileostomy was devised by Dr. Koch known as a Koch Pouch, sometimes spelled Kock or referred to as a K-Pouch. The technique was later revised by Dr. Barnett and is known as a BCIR - Barnett Continent Intestinal Reservoir.

The BCIR changes the direction of the nipple valve in comparison to how it is with a Koch Pouch. This change in direction allows for the muscle contractions to direct waste and mucus toward the internal pouch rather than the stoma. An intestinal collar is also created by the BCIR that tightens as the pouch fills with waste. This collar tightening helps to prevent the nipple valve from slipping.

According to WebMD, following the creation of the continent ileostomy, an indwelling catheter will stay inserted into the internal pouch to allow for continuous draining for 3-4 weeks. The catheter will need to be irrigated several times a day as well with an ounce of water. Once the internal pouch heals and matures, the pouch will need to be drained several times per day. Without draining, the pouch will fill and risk tearing or the nipple valve slipping or leaking.

A conventional ileostomy and a continent ileostomy both are life saving and allow an individual to continue living with minor adjustments to activities. An ostomy of any kind does not have to limit an individual's lifestyle and can allow for increased quality of life. If you are facing surgery to remove your colon for any reason, a continent ileostomy may be another option for you to discuss with your doctor.