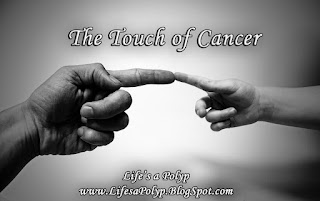 Colon Cancer Awareness Month always leads me to reflecting upon my own family's experiences with colon cancer. I've mentioned before that FAP has ran in my family for many generations and we have had countless numbers of members die from colon cancer. Although my father's family doesn't have FAP, my paternal grandmother died of colon cancer and a very beloved paternal aunt of mine also unexpectedly developed and survived colon cancer.

Growing up with both my grandfather and mother living with FAP allowed me to gain a lot of firsthand knowledge and understanding of ostomies, FAP symptoms, and eventually cancer. I realized that the majority of people weren't experiencing what my family was and yet it was all completely normal to me. With each generation of FAP in my family, the more we've gained in information and understanding.

My grandpa survived colon cancer and appeared to lead a healthy, stable life. He developed colon cancer in the late 1950s and had his colon removed and a reconnection. I have vague flashes of visiting him in the hospital in 1994 when he developed rectal cancer and underwent another surgery for ileostomy and radiation. I never saw him struggle with his health after that until the last year of his life. He didn't let his ileostomy stop him from what he enjoyed. We went on several fishing trips, hiking through the woods, canoeing and camping trips every year. My grandpa was one of the most cherished individuals in my life. He taught me indescribable amounts of knowledge, skills, and values; we spent countless days and sleepovers together. There was no one like my grandpa and in my eyes, he could do no wrong. He was a strong, independent man with a great love for the land and his country; he fought in World War II and was awarded a Purple Heart. He saw and experienced unimaginable horrors that he kept locked away, rarely to be spoken of again. He was a no non-sense man and yet he could laugh and play in the most fun loving ways with his grandchildren.
﻿ Then one day, the health of this robust man began to decline. It started with reflux after eating at times, this reflux continued to worsen and he began vomiting small amounts and then large amounts after ingestion. He was rapidly losing weight. He sought medical care at our local VA and was prescribed anti-reflux medication and was advised that his esophagus was narrowing causing the reflux and vomiting. He underwent procedures to place stent like devices at the opening of his stomach and within his esophagus to reduce the vomiting and reflux. This reduced the symptoms temporarily but never provided the necessary relief. His weight continued to decrease, his body was wasting away already. Unfortunately, thorough testing wasn't performed from the onset of his symptoms but instead 4 months later when he was admitted to the VA hospital. After he had his ileostomy, he was never told he should have routine endoscopies and therefore never had any performed again until this admission. Once he finally underwent an endoscopy, the true culprit of his symptoms was discovered - FAP had caused stomach and esophageal cancer. This discovery came too late, cancer treatment wasn't a viable option and hospice was elected. Over the course of the next 3 months, my parents and I visited him routinely to help provide care and spend as much time as we could with him. Towards the end of his life, his mental capacity was altered and he was succumbing to the vast effects of cancer. I watched him mistake tv remote controls for the telephone as he tried to answer the ringing he heard. The bedroom I grew up in taking naps and watching wrestling with my grandpa was now his deathbed. He was no longer speaking and rarely conveyed any acknowledgement of his loved ones around him. I held his hand and told him how much I loved and cherished him and although deeply saddened, it was time that he left this earth. He squeezed my hand and I knew my grandpa was still there trapped within that cancer ridden body. I knew he heard me and he gave me the greatest gift he could - a hand squeeze. He died the next day.

My mom was the only child of my grandpa's to inherit FAP and expected her experience to be much like his had been the majority of his life. My mom's journey was fairly calm until she unexpectedly received a diagnosis of colorectal cancer shortly after giving birth to me. My grandpa's health wouldn't change for the worse until 14 years later so everything up to this point was considered normal in our family. My mom expected to have the same surgery as my grandpa's first surgery, large bowel removal and reconnection. My parents were surprised with different news - a permanent ileostomy and very little information. Soon after my birth, my mom had her surgery and experienced a multitude of complications and nearly lost her life. Unlike my grandpa, whose struggles I rarely witnessed until the last year of his life, I witnessed my mom's struggles daily with her energy, ostomy, and frequent intestinal blockages. I've been fortunate to never have issue with food causing intestinal blockages. Yet my mom experiences intestinal blockages nearly monthly in spite of her best preventative efforts and would often require hospitalizations from the blockages. Fortunately, her number of hospitalizations have significantly reduced over the years. In 1998, she underwent the Whipple Procedure due to a precancerous FAP polyp in her duodenum. The surgery was successful but she had a difficult recovery with extreme pain and stomach issues that seriously impacted her ability to eat for an extended period of time.
﻿ My mom is my true inspiration and my hero. We experience the common mother-daughter relationship issues but I couldn't ask for a better mother. She has always been there for me, so very understanding and supportive. Because of her FAP experiences, she's able to fully relate to my health challenges. That's an incredible and rare gift a mother can give her child, especially when it comes to a rare disease. My mom let me know I wasn't alone in this journey when I didn't know anyone else outside of the family with FAP. Even in her own health challenges, I'm one of her first thoughts. When we were both simultaneously hospitalized, she chose the adult hospital connected to the children's hospital so that we could visit. As an adult, I've had the honor of returning some of the care she so quickly and willingly provides me. FAP has placed very difficult choices and tasks upon my mom regarding herself, her father, and her child and yet she faces each obstacle with an intense resiliency and quiet strength. I would never wish any health issues upon my mom but I can't help feeling grateful that if both of us were going to have health issues anyway, I'm glad we share them. By sharing this disease, she was able to teach me about the disease, ostomies, and the values I would need to develop the skills necessary to live with this disease. I would be lost without her.

Like most families affected by FAP, colon cancer is sadly part of our family. I think of the numerous ancestors my family has lost to colon cancer and how it has touched each of my family members. The rarity of FAP, a colon cancer causing disease, is evident in each of our stories. We all experienced doctors who were unfamiliar with FAP and thought cancer stopped with the colon with FAP. Medical care and informed medical decisions were not properly provided to all of us. This lack of information and proper medical care significantly impacted us and our outcomes could have been drastically altered with the proper information and treatments. My grandfather and mother could have been diagnosed significantly sooner, received treatments at the early stages of cancer and not have experienced such risks to their lives and ultimately death for my grandfather.

This is yet another reason why research and awareness is essential for the treatment, cure, and survival of  individuals with rare diseases and cancers. The FAP Research Fundraiser was a huge success and we raised $640 to start a FAP Research Fund with the National Organization for Rare Disorders. You can now find all kinds of products with various designs with proceeds donated to NORD FAP Research Fund at Life's a Polyp Shop. I hope you'll join our efforts. 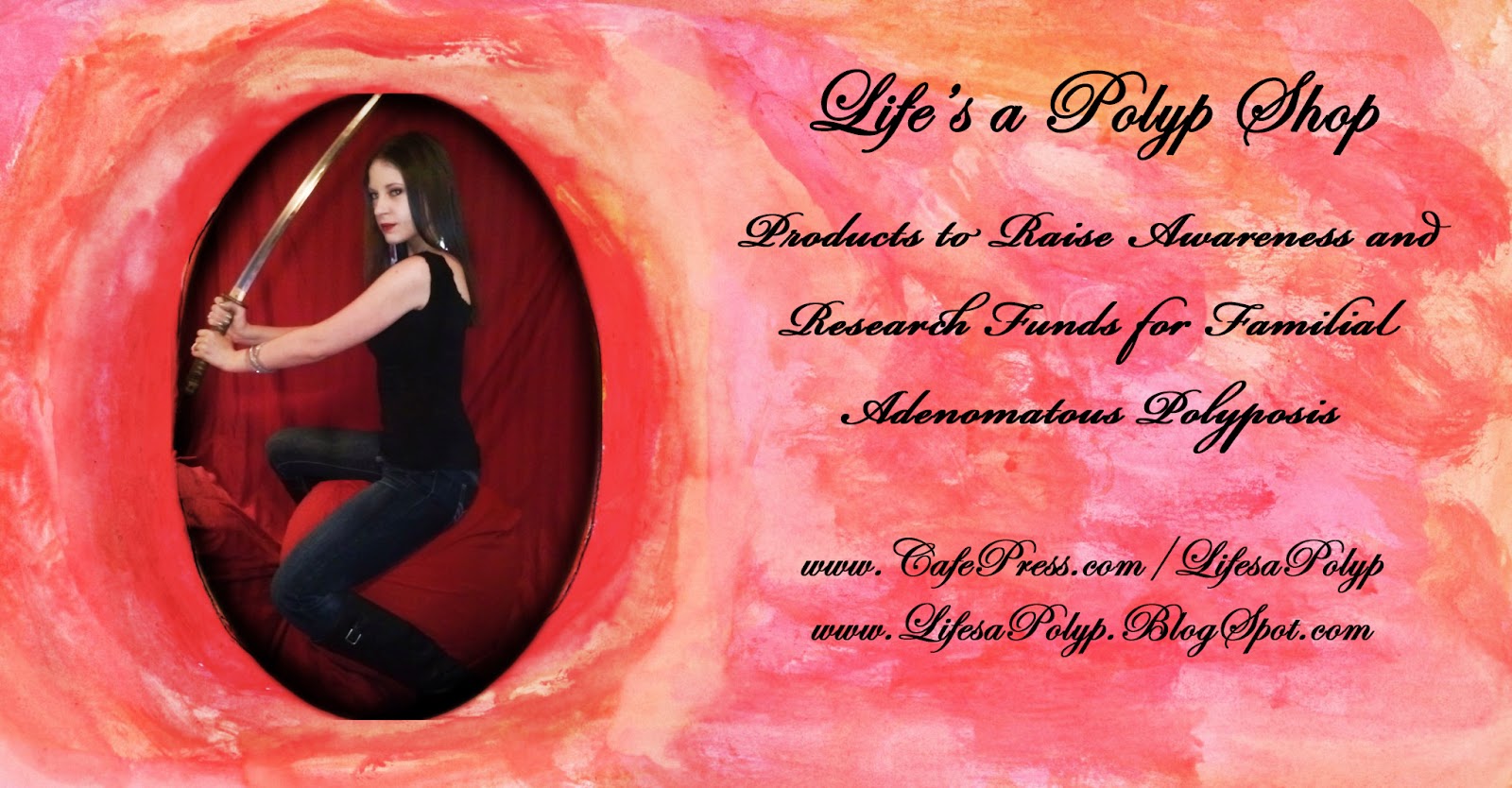 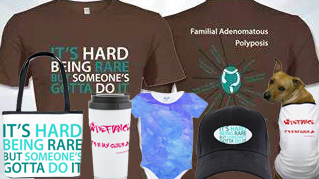