A Mission for Early Cancer Detection 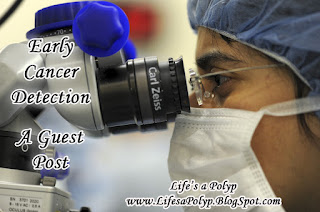 My name is Daniel Shockley, I reside in Hawaii and retired at age 43 from the Navy in 2003 after serving 22-years on active duty. My last three years were spent while deployed to Middle East in direct support of OPERATION ENDURING and IRAQI FREEDOM. Fast forward to May 2012, I underwent my first colonoscopy that was scheduled at age 51. The procedure was performed by Dr. Fernando Ona of the GI Clinic at Spark M. Matsunaga Veterans Affairs Medical Center, Hawaii. Approximately 100 polyps were discovered throughout my colon, rectum, and anus. A large mass was found in my ascending colon causing an 80% blockage. Based on these findings I was immediately referred to Susan Donlon, Certified Genetic Counselor, Tripler Army Medical Center (TAMC), Hawaii.  It was suspected I may have a gene mutation which can be confirmed by DNA testing.  The DNA samples were gathered and sent to a molecular oncology laboratory in California.  Approximately three weeks later the results arrived and revealed the rare gene mutation, Adenomatous Polyposis Coli (APC), which is an inherited disorder best characterized by the development of a myriad of polyps in the colon. These findings confirmed the diagnosis of Attenuated Familial Adenomatous Polyposis (AFAP), which is a variant of Familial Adenomatous Polyposis (FAP) that can best be characterized by fewer colorectal polyps (commonly 10 – 100), later age of onset of polyps (mean age of polyp diagnosis, 44 years), and cancer (mean age, 56 years).
﻿ It should be noted, Dr. Henry T. Lynch, Creighton’s Hereditary Cancer Center, Department of Preventive Medicine, is credited with the discovery of AFAP. Additionally, Dr. Lynch is one of the founding fathers of genetic research. There are currently no statistics on AFAP. However, it is estimated that <0.03% of the global population have this condition.

Upon receiving the diagnosis of AFAP, Lt. Col. Ronald Gagliano, Chief, Colon and Rectal Surgery and Director, Surgical Research, TAMC along with Susan Donlon, informed me surgery was inevitable, as there is no cure for AFAP.  It must be noted leading up to the confirmation of AFAP and prior to the colonoscopy, I considered myself to be in good health with no indications of any problems with my colon.  Furthermore, there is no known family history of colon problems. Dr. Gagliano and Susan Donlon encouraged me to read about my condition, the type of surgery required, and life after surgery. This is when my personal research journey commenced.  My focus from the onset was to embrace this condition.  My quest was to better understand this disease and what impact it will have on my life. Dr. Gagliano recommended, based on the DNA test results, that in the best practice of medicine colon surgery is needed.  I concurred and the surgery, known as a total-proctocolectomy with ileostomy, was scheduled at TAMC.
The surgery was successfully performed at TAMC in July, 2012.  The rectum, anus, and entire colon were removed. A large mass in the ascending colon turned out to be an 8cm tumor. The pathology report revealed the mass was a tumor and was listed as high grade dysplasia.  As a result of my surgery I have an ostomy which is a prosthetic device that collects my waste. I have adapted to this lifesaving and life changing surgery. To date, I continue reaching out to numerous organizations, both local and abroad, in an effort of sharing my experience. My mindset has been, and continues to be: I tend not to think about things I am unable to control. Medical issues I am unable to control. What I can control is my attitude and after 5 decades on God's green earth my positive attitude has brought me this far, why change now! Furthermore, I can attest that worrying is not the cause of my condition. Therefore, worrying will not make it go away. Based on my personal research of this disease, I am able to better understand my condition, overcome adversity, adapt to my new lifestyle, and persevere with my life. .
On a personal note, I consider having AFAP as a challenge rather than an obstacle.  I continue to press on with my life with business as usual approach.  As a result I have adopted four (4) words to reflect on as part of my new journey in life as an ostomate and advocate for colorectal cancer awareness focusing on the importance of early detection:

My analogy of the word FAITH:  Having the ability of believing in something you are unable to see, but you know it is there. Example: You cannot see the prevailing trade winds; however, you can see what affect they have by the swaying of the palm trees.  My positive attitude had a direct impact on my FAITH which allowed me to have a significantly better chance of overcoming adversity.

My analogy of the word ADAPT:  After undergoing total-proctocolectomy with ileostomy surgery I had to adjust to this new lifestyle without a colon.  An ileostomy can be best described as a stoma.  This is a surgical opening constructed by bringing the end of the small intestine out onto the surface of the skin on the lower right abdominal area.  The intestinal waste passes through the ileostomy and is collected in a prosthetic pouching system which is adhered to the skin over the stoma.  The pouching system requires changing every 3 – 4 days.  Having an ileostomy is a transition to a life changing experience.

It is evident my positive attitude directly influenced my faith which directly aided with my ability to adapt to lifestyle as an ostomate. From the onset I embraced being an ostomate as a challenge rather than an obstacle or disappointment.


﻿ Proclamation ceremonies were conducted in the Mayor’s conference room (above), Wednesday, February 25 and in the State Capital Ceremonial Room (right), Friday, March 13, 2015. It should be noted, these are the first ceremonies of their kind for this campaign.

Together we can make a difference on sharing the importance colorectal cancer awareness and early detection.

Daniel Shockley was diagnosed with Attenuated Familial Adenomatous Polyposis (AFAP), a subtype of Familial Adenomatous Polyposis. Since diagnosis, surgery to remove a pre-cancerous tumor and create an ileostomy, Daniel has made it his mission to spread awareness about colorectal cancer and the importance of early detection. In addition to public speaking, Daniel also uses his experiences to advocate for legislation in support of colorectal cancer detection and treatment programs. All of Daniel's efforts can be followed through The FAP Gene Support Organization, based in England.
Learn the differences between FAP and AFAP.﻿