The Continued Mystery of My Post-Surgical Chronic Pain 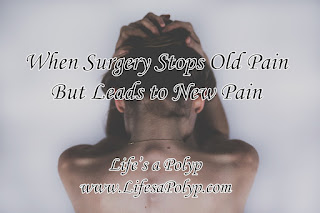 I was hoping my health would have improved after experiencing chronic pain complications after returning to work following my 8th surgery; but alas, there has been none.

Not only has my pain continued throughout the majority of my torso, since 9/28/21 my incisions have
started feeling as though they are ripping from the inside out whenever my abdominal muscles are strained or stretched in the least bit.

I returned to the surgeon on 10/6/21 and he decided to order another CT scan without contrast as my pain hadn't improved. My latest CT scan on 10/14/21 revealed a small hiatal hernia and everything else remained the same. I was distraught upon reading these results. I fully expected to require additional surgery in my lifetime but I didn't expect the possibility of another surgery so soon. I contacted the surgeon's office asking to speak to him about the CT results as I was very upset. He contacted me via phone that afternoon and the information I was provided was even further upsetting to me. I had been crying nearly non-stop after reading my CT results and was actively crying when he called me. The surgeon told me that he believed: