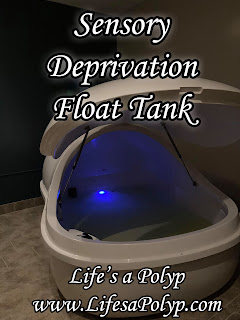 I've wanted to try out a sensory deprivation tank for years now and this year, for my birthday, I finally went to one.

Sensory Deprivation is also known as Restricted Environmental Stimulation Therapy. A sensory deprivation tank is a float tank that contains Epsom salt (800 pounds or more) in a small amount of water to allow an individual to effortlessly float. Floating in salt concentrated water allows pressure to be removed from joints, muscles, and tendons. The tank is closed to eliminate all sensory tasks including light and sound thereby allowing the entire body to enter a deep level of relaxation and process information and thoughts in a new way without distraction or strain. The water and air are heated to skin temperature to reduce the sensation of water on the skin. Benefits can include reduced joint, muscle, and nerve pain, improved sleep, energy, creativity and mood with a reduction to depression and anxiety. Soaking in Epsom salts helps soothe sore muscles and irritated skin and reduce swelling thereby helping with minor aches and pains. 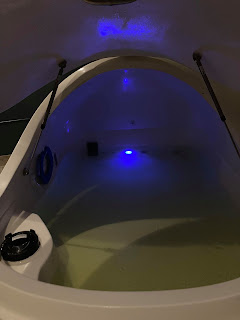 My boyfriend and I went to a local float spa. Each suite had it's own sensory deprivation tank and
private shower. We were instructed to shower, using their provided products, before and after entering the float tank. The reason to shower before is to remove any oils or body products that would enter the tank water and with hundreds of pounds of Epsom salts, one would want to wash again afterwards to remove the salt water. The tanks could be left open or be closed and offered a blue light that could be turned on or off as well as sounds. We both decided we wanted the full experience and so we turned off the light and any sounds and kept the tank closed. We were offered ear plugs to further reduce sound and help prevent water from entering our ears. The suite and tank weren't completely sound proof but the float spa was kept quiet and soothing music was quietly played in varying areas of the spa. A head flotation device and spray bottle to rinse your eyes of salt water were also available.

We laid with our heads at the end with the blue light and quickly discovered just how buoyant we were in the saturated salt water. We both kept floating around the tank until the water settled from our entering the tank and disturbing the water. Any movement inside the tank would disturb the water resulting in floating around the tank once again. The water felt silky when touching my skin due to the high level of salt. The salt water could cause slight burning to any open skin that was cut or irritated. Protective ointment was offered to help reduce any stinging from the salt water. We started floating with our arms down by our sides, however, we both felt tension in our shoulders and neck in this position. I found stretching my arms above me to be comfortable and my boyfriend remained with his arms down by his sides and stated that eventually his shoulders and neck relaxed after a period of time. We both have neck problems so I'm not sure if the shoulder and neck tension we both experienced was related to our neck conditions or if others would have the same experience. My boyfriend also has chronic nerve pain in his back and lately his knee has been bothersome as well (we've since learned he had a meniscus tear so no wonder his knee was hurting). I noticed completing a full body stretch in the tank was very pleasurable and felt better than typical stretching outside of the tank. My boyfriend reported reduction in pain after the float but was experiencing pain again by the evening time.

I had a difficult time shutting my mind off in the beginning of the float by towards the middle of my float time I was able to experience a meditative state. My boyfriend became so relaxed he almost fell asleep during his float. There are many benefits to meditation and a sensory deprivation float helps to reach a deep meditative state by relieving the body of sensations. Some of the benefits of meditation include to reduce stress, anxiety, pain, and improve sleep. Meditation becomes easier and more effective with practice. I would conclude that this would be the same for sensory deprivation floats as well. Visit here for a list of relaxation techniques you can complete at home.

Overall, we both enjoyed our float experience and would recommend it to others.
Posted by Jenny at 5:33 PM