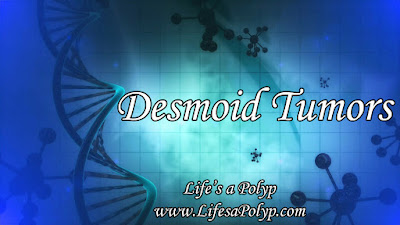 Desmoid Tumors, or aggressive fibromatosis, are another rare disease that is common among those with Familial Adenomatous Polyposis (FAP). According to NORD, up to 32% of those with FAP will develop a desmoid tumor due to a mutation on the APC gene, where the FAP mutation is also found. Mutations may also be found on the beta catenin gene that may also cause desmoids to develop.


Desmoids have similarities to cancerous tumors called fibrosarcoma but are benign as they do not spread to other body parts. Desmoids develop in the connective tissues of the body anywhere in the body. Superficial desmoids are typically less aggressive than deep desmoids in the abdominal, extra abdominal or mesenteric areas. Deep desmoids look like dense scar tissue and are difficult to remove as they adhere to surrounding structures and organs. Although desmoids are benign, they can be life threatening due to compression on organs such as intestines, kidneys, lungs, blood vessels and nerves. Repeated irritation or trauma to a certain body area may increase the risk of a desmoid developing. Desmoids may grow slowly or rapidly and at times may even shrink without any treatment. Depending on the size and location, desmoids may have no symptoms or may cause:
Diagnosis of a desmoid can only be conclusively made through biopsy but evaluation of the tumor can be completed through ultrasound, CT Scan, and MRI. Desmoids are often closely monitored as a first treatment option due to the varied and unpredictable nature of desmoid growth. Surgery to remove a desmoid is not always the best treatment option as there is a high recurrence rate and there may be a more aggressive recurrence after surgery. Chemotherapy and radiation may be sought but also pose health risks to morbidity and mortality. Anti-inflammatory drugs may cause desmoids to shrink and anti-hormonal medications may help reduce growth in addition to novel molecular-target therapies such as receptor kinase inhibitors. Clinical trials continue to be conducted for new desmoid treatment options.


It is recommended to be evaluated by a doctor and hospital that has expertise in sarcoma. Preferably, the medical team for someone with a desmoid would include medical oncologists, surgical oncologists, radiation oncologists, geneticists and nurses. The Desmoid Tumor Research Foundation has resources and clinical trials for those with desmoids and also may help finding a doctor with expertise in sarcomas in the United States and the Desmoid Foundation of Canada is available for those residing in Canada.

I was diagnosed with Familial Adenomatous Polyposis/Gardener's Syndrome (FAP) at age 10.  I am the first person in my family to have FAP due to a spontaneous genetic mutation. Around that time, I had a tumor removed from my right jaw.
Ever since my diagnosis, I have had yearly or bi yearly colonoscopies and endoscopies to keep an eye on my colon and the surrounding area.  In 2004, after my annual scope, my gastroenterologist told my family and I that it was time to remove my colon. We were told that I would likely die if we didn’t.


My parents and I traveled to the Cleveland Clinic in Ohio to have the procedure done there, as at that time, The Cleveland Clinic was a top hospital for treatment of FAP patients. We also chose to have it done there because they were one of the first facilities to perform laparoscopic surgery, and it was done as a “pull through” where the colon is removed and the small intestine Is attached to the rectum.  Having it done that way, we were able to shorten the recovery time from about a week, to about 3 days.

A few days after we returned home to Seattle, I missed a dose of the pain meds I was given to help with my recovery after they surgery. Missing that dose ended up saving my life, as I began having massive abdominal pain, and was take to urgent care. After various tests, I was rushed to the ER via ambulance for emergency surgery. A small hole had developed where the small intestine was fused to my rectum, and I had a massive infection in my abdomen.
That surgery saved my life, and my doctors and nurses told me that when I arrived in the ER, I was in sepsis and no more than an hour from dying. The emergency surgery that was performed gave me a temporary ostomy, with the goal of giving it 6 months to heal and performing a reversal.


During my reversal surgery 6 months later, my surgeon stopped the procedure mid-way through. There was so much scar tissue, that they had to come up with another plan. They decided to give me a permanent ileostomy, which I have now had for almost 16 years.


Recently about 8 years ago, I traveled to the Cleveland Clinic to have a larger desmoid tumor removed from the right side of my abdominal wall just below my rib cage.  My colorectal surgeon was able to safely remove it, and it was sent to the lab to be studied.  This surgery was relatively routine, and I did not have any complications.  I was hospitalized just short of a week and traveled home with no issues other than post-op pain management. This tumor was removed at a good time, as my doctors told me it was pressing on my rib cage, and nearly broke my ribs.


Fast forward to 3 years ago.  I noticed a bump in my abdominal wall and made an appointment to see my doctors at the Seattle Cancer Care Alliance.  Various tests were done, and it was determined the bump I noticed was a Desmoid Tumor.


This type of tumor is usually non-cancerous but can still grow and cause problems.  My oncologist suggested that we treat it with proton radiation therapy, as surgery would be potentially dangerous.  Radiation therapy can more specifically target the tumor, so less surrounding area near the tumor is affected.
Luckily for me, the Seattle Cancer Care Alliance here in my hometown has a Proton Therapy Center just north of Downtown Seattle.  We scheduled an initial appointment there to go over the plan.  The staff there did an initial CT scan to map out the area to be treated, and make sure the exact site was marked.  They put a few ink tattoo dots in specific coordinates so that when I begin my treatment, the staff will know exactly where to position the equipment.


We then scheduled the treatments themselves.  They would be done once daily Monday through Friday for a total of six weeks.  When the day came for my first treatment, I honestly was not nervous at all. The staff there are wonderful and help make you feel very comfortable.


When I arrived at the center for each day’s treatment, I checked in with the staff at the front desk. You are given a bathrobe to use for each treatment visit, so when they take me back, I would change into a hospital gown.  Once the treatment room is ready for you, they bring you from the waiting area. I would lay down on the table. The room has lasers that help the staff position the table in the right coordinates.
Once they are ready, the staff would leave the room to their control room, and shortly after, the gantry above me would begin to move into position, and the treatment would begin.  The treatment itself was 100% painless and would only take 20 minutes or less each day.


My nurses did advise me that beginning about a week into my treatments, the proton radiation would cause my skin to change slightly at the treatment site. It caused my skin to develop wet blisters, which were initially tricky to deal with. Since it was just above my ostomy site, I had to learn to cut my wafer a bit differently so that the skin with the wet blisters from my treatment were able to heal properly.


Fast forward to six weeks later, and my treatment was competed.  They give you a certificate of completion, and a “Challenge coin” to commemorate your graduation from treatment.  I met with my oncologist after the end of my treatment, and we learned that I would need to schedule an MRI every six months for the next 5 years to check on the tumor that was treated.
As of today, it has been just over 3 years since I finished my treatments, and my oncologist says that the tumor they treated has stopped growing, and even shrunk a bit. I have 2 years left of MRI’s, and then I will just have annual visits instead.


I am extremely grateful to my medical team of doctors and nurses both here in Seattle, and in Cleveland. They have both been incredible participants in my ongoing medical care.

Esten Gose is a 37-year-old with Familial Adenomatous Polyposis (FAP), born in Seattle, WA and currently living in Snoqualmie, WA with his wife and 2 cats.  He has been married to his wife Jennifer for almost 5 years. He has had his ileostomy for almost 16 years. Esten enjoys sports, traveling with his wife, and spending time with family.