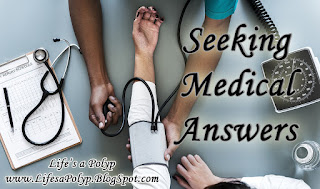 My health abruptly changed in 2015. Until that dreadful day in May 2015, my health had been stable since 2007, when I had an unexpected hospitalization due to my hemoglobin inexplicitly plummeting to 4. In 2015, I was suffering from loss of appetite as a side effect of my antidepressant medication resulting in a hospitalization for dehydration.

I continued to feel well physically until the night before my discharge from the hospital. That night I started experiencing an unceasing headache. The headache didn't improve with Tylenol and I finally gave in to trying Morphine - even though Morphine stopped managing my pain several years ago. However, it was in the middle of the night and I didn't want to bother my hospitalist with a medication order simply for a headache. So I consented to give the Morphine a chance to work. As I suspected, the Morphine had no effect on my pain and instead caused extreme nausea and constipation. It wasn't until I was given Phenergan that my nausea started to subside and I was finally able to obtain some sleep in spite of the pain. I didn't expect though to experience such an intense slow down of my bowel that I would feel as though I was starting to have an intestinal blockage from the Morphine.

And that's when my health changed for the worse once again - with that Morphine shot. Ever since I received the Morphine, I've been experiencing chronic nausea, early fullness, and increased abdominal pain particularly when eating. My GI doctor at the time ordered an upper scope and a barium x-ray to check for anything blocking my stomach or delaying gastric emptying. Both tests results were negative for any issue. My doctor chalked my nausea and pain up to adhesions from my previous surgeries. This was quite likely as I have had problems with adhesions previously causing nausea, vomiting, excessive diarrhea, and abdominal pain. It made sense and with multiple trial and error of medications, we found a regiment of medications that managed the symptoms to a tolerable level. I reached a point that I was able to accept my new health status.

My health started to change again though once again in 2017. I've started to have more intestinal blockages - two this year already - whereas I never had this issue previously. My last blockage was in mid August and it was as though someone once again flipped a switch on my health and it abruptly changed yet again. My blockage, fortunately, cleared on its own the next morning. However, with the clearing also came extreme early fullness and abdominal pain with eating. I was no longer able to eat an average size meal. Instead, I was being reduced to eating 8 ounces of soup and feeling as though I had over eaten. The nausea remained at the same level and actually improved due to reduced food intake. My early fullness and abdominal pain continued to worsen though as time went on since the blockage in August. I was further reduced from 8 ounces of soup to a few bites of food and was no longer able to drink liquid without severe abdominal pain and bloating.

With the news of my increased frequency of blockages and my worsening symptoms, my new GI doctor ordered a CT Scan with Contrast. The results showed:
With these results my new GI doctor believed my symptoms were stemming from adhesions, gallstones, and the fallopian tube. And so he ordered labs to check my values and referred me to my gynecologist. My gynecologist advised she thinks the issues with fallopian tube are simply adhesions and not an issue but will be ordering a pelvic ultrasound for better imaging of the fallopian tube for further diagnosing but wants to wait until my GI issues are improved to allow for improved viewing of the ultrasound. My lab results came back well.

My doctor decided to stop my Sulindac medication as side effects of Sulindac include nausea, pain, and diarrhea and to double my Prilosec to help heal any ulcers or irritation possibly caused by the Sulindac. I did notice some improvement to my ability to eat in the evenings. However, the mere sip of water with a morning Prilosec caused instantaneous pain and bloating followed by severe nausea within 20 minutes. Throughout the day my pain continued as well as difficulty eating due to the pain and early fullness. I started to have some days of constipation, which are rare for me on account of my Short Bowel Syndrome.

Next my GI doctor ordered stool samples to be tested and upper and lower scopes. My lab results came back as positive for C-Diff infection and my scopes showed enteritis, or inflammation of the small intestine, likely caused by the C-Diff. I also still have fundic gland polyps in the stomach and a new small polyp in my small intestine that was biopsied to test for cancer. I was started on a round of Vancomycin antibiotics for the C-Diff and my doctor advised I should start to feel better within 2-3 days of starting the antibiotics. And so I wait for both the pathology results and for the antibiotics to work.

As I'm awaiting resolution of my symptoms, I can't help but wonder if some of these issues were starting to appear in 2015 when my health suddenly took a turn for the worse and it was missed by my then GI doctor who dismissed my symptoms as adhesions and adhesions only. Was I developing gallstones back then and it was missed because testing was restricted to only inside my GI tract? I experienced concerns with the previous GI doctor in relation to my Iron and B12 levels as he felt I didn't need either supplement and after consenting to a three month trial without my medications, my levels worsened and I have since required regular iron infusions in addition to iron medication to maintain appropriate iron levels.

I'm trying to not dwell on the what ifs of what may have been discovered two years ago if my doctor at the time had taken the time for additional testing. Perhaps nothing else would have been found. Either way I am grateful for my current doctor for taking the initiative to continue to search for answers and resolutions to my symptoms. Although he anticipates my symptoms to significantly improve once the antibiotics are completed, he reassured me that if the symptoms aren't improved upon we will continue to search for answers to increase my comfort to beyond a just functioning level. My spirit and hopes are lifted with this reassurance as I give time for the antibiotics to work and hopefully work with great outcomes.