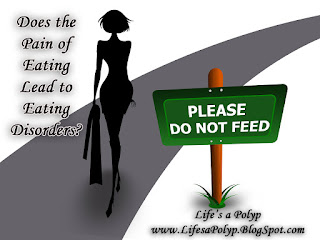 A while ago, I randomly came across an article discussing the common risk of eating disorders among those with chronic illness and although not a novel idea, I find myself often thinking back upon this as a new revelation in my life. I hadn't given much thought to the link between chronic illness and eating disorders even in spite of my own previous diagnosis of 'relative anorexia'.

When I was in grade school after my first year of surgeries, my body became accustomed to not eating and so I ate very little even when I was allowed to eat freely. A consulting doctor wanted to provide me with a feeding tube and thankfully, my pediatric GI doctor stepped in and realized that my limited food intake wasn't because I refused to eat or had a desire to lose weight but rather a habit that formed as a result of my chronic ill health. I was placed upon a weight gaining diet and gained from the 80s to 100 pounds. 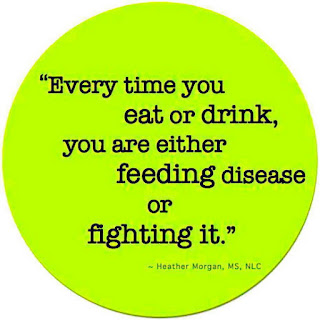 Through the years, particularly after my second round of surgeries, I have endured a very strong love/hate relationship with food. Food causes me great pain and inconvenience at times yet food is a necessity for survival and typically I enjoy the pleasure of eating. In spite of the pleasures of food, I still feel my very best when I fast for long periods. There are many days that I can easily fast for 2-3 days with little complaint. Not eating isn't a body image ordeal for me; the relief of not eating sometimes outweighs the pain and discomfort of eating. I feel my very best when I don't eat and when I'm underweight. I actually feel lighter, healthier, and more free without the heaviness of food and the digestion process weighing me down. And yet I realize this is unhealthy - one needs regular food intake to sustain proper health and nourishment.

The feeling of severe bloating and fullness, toxicity, and pain after eating has at times led me to finding relief through the use of agents with laxative properties, such as milk of magnesia or foods with laxative effects, or vomiting - although with seldom invocation and never with a premeditated intent such as in bulimia. Last night was such a night. I stood over the toilet and debated...do I want to vomit to relieve some of the pressure and pain or do I want choose the healthier choice and let my body complete digestion on its own. Once again, I realize this is unhealthy behavior but at times I find the possibility for relief overpowering.

Understanding the desire and need for relief from pain resulting from eating leads to understanding the fine line between relief and an eating disorder. Habits are easy to form, especially when they are positively rewarded, such as pain relief. These habits can become compulsive and obsessive in a short time as the cycle is continued. The line between relief and eating disorders becomes smaller and smaller and we can be left with greater issues than those with which we started.

It's been 20 years since the way I look at food changed and during that time my body's reactions to food have changed multiple times and each time a new set of trial and error learning commences. I don't easily accept change and often must undergo several backfire events from resisting adaptation before I will begin to alter my behavior and adjust to a new set of rules.

Adaptation is necessary to prevent further complications such as the risk and side effects of eating disorder like behaviors. It is an ongoing learning process as we gain understanding through trial and error and in discussion with others to learn from their experiences and insights as well. It's necessary to discover how our body reacts to certain foods and in what quantities as well as taking into consideration our altered digestion that presents with challenges to absorption and digestive processes. Such discovery will allow us to make better eating choices while reducing negative side effects. Yes, easier said than done. 20 years later and I still strongly resist what I know is in my best interest when it comes to eating and my food choices as I often cycle between healthy eating and overindulgence and poor food choices. Recognizing our harmful choices and behaviors is a start to changing harmful to healthy, as without recognition there is little room for change. Recognizing and understanding the struggle of one evil - pain - against another evil - unhealthy behaviors - helps us to make better decisions and realize the consequences of both choices.

Finding the balance between health issues and diets can be tricky as some diets for different conditions contradict one another, such as renal and diabetic diets yet renal failure and diabetes are often seen together. For healthy food choices and information view the following guides for ostomates and those with short bowel syndrome. Encourage and support one another among the struggle. If you think you or someone you know has an eating disorder, seek help.
Posted by Jenny at 8:21 PM