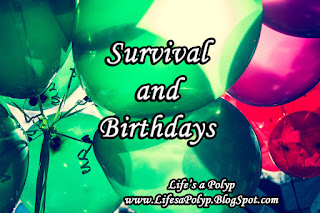 Today I am 30 years old. Most people fret over reaching 30, leaving their 20s and "younger days" behind. My mind is elsewhere today as I survey my life in awe. I've miraculously reached an age I never believed I would reach. I have surpassed ages I shouldn't have passed. Like many with chronic health issues, being told that I shouldn't have survived a situation or I'm not likely to live past a certain age isn't new to me. I've heard such statements since I was 9 due to complications and medical negligence and again throughout high school and into college during a several year recovery period from my reversal and subsequent complications. 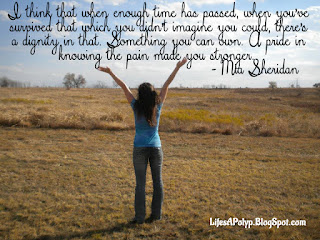 I recall lying my head on my mother's lap as she sat on the couch stroking my hair and I told her how I loved her and said my farewells. I could feel the life draining from me, peace beginning to surround my spirit. I was uncertain how many more moments I had remaining but I knew they were coming to a close. I watched her tears run down her cheeks as she gazed upon and told me how she loved me. I had never felt such peace and have never again since this time.

I was back in the hospital soon after, veins being pumped with electrolytes and blood coursing life back into me for another day. If this had been delayed in its delivery by a few more days, I wouldn't have survived. There were many weeks my doctors weren't sure if I'd live to see them the following week due to risk of heart attack or brain seizures. Over the following years my health would gradually improve and become stable again.

Due to my ongoing health crises, I came to fervently believe that I would not live past the age of 21. I held this belief so firmly that I completed all of the end of life documents and arranged the details of my funeral according to my wishes and distributed copies of this information to my executors of my will. This belief was further cemented as I began to develop precancerous polyps within my stomach and my pediatric GI doctor predicted I would develop stomach cancer by the age of 30. The treatment of which I was still unsure I would be willing to subject upon myself.

My conviction was so strong that I was left amazed when the clock struck midnight on my 22nd birthday and I was still breathing. How could I still be living? I have wondered this many times throughout my life. I have been prepared for death for 2 decades and at times I feel as though I have been teased with death and the chance for peace from my health issues, particularly on the most difficult days. I remain ready for the day of death, waiting for the day that I was told would come so long ago.

And yet I continue to survive. And survive quite well in my opinion. I had many years of struggles and presently I am battling chronic nausea, pain, and difficulty eating after a recent hospitalization. I remain standing amidst the battle. Cancer free. Precancerous polyps free.

I have learned a lot over the course of my disease and I have gained a unique understanding of myself, life, death, the world, and what Familial Polyposis (FAP) means for it all. FAP isn't a death sentence to me. It doesn't guarantee to shorten my life expectancy...it simply complicates my life. I won't know how it affects me otherwise until the progression of developments occur. FAP affects each person differently to a drastic degree. My grandfather had very little problems after he received his ileostomy until his death at age 81 from stomach and esophageal cancer due to the FAP. Others are not so fortunate and children are presenting with symptoms and precancerous polyps at younger and younger ages. Each person's story and battlefield is different though in the position of landmines. I refuse to believe I have no choice in my footing amongst the landmines though.