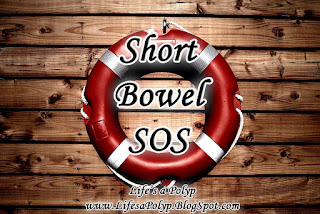 Last night was awful. Actually, last night was fine it was early morning today that was awful. I had another episode into the work day. I have an episode at least twice a month on average. These episodes consist of my SBS going haywire for several hours causing me to start debating my every move, moving like a very slow hunchback or a speed walker on actual speed, and forcing myself not to scream out loud. These episodes typically are brought on by food upsetting my system, whether it's overeating or eating foods that are too rich, fatty or greasy. And sometimes I can't identify a trigger for it, all I know is my body is screaming SOS even if I'm not letting the screams out.
This time was the worst one in a while. It seemed to last longer and hurt more. I was literally running to the restroom every 5 to 10 minutes and if I tried to hold off then I risked a messy consequence. I hate when my body won't allow for a postponed restroom trip, it pretty much only occurs during my sleep and even though my husband understands and doesn't care, I'm still embarrassed when I have to run back to the bedroom for clean clothing and he wakes up to hear me rummaging through the dresser drawers in the dark or I have to wake him to ask him to bring me clothing. I hate him seeing me like that, I shouldn't be. It's beyond my control, it's not anything any person enjoys or wants and I take precautions for myself to avoid such occurrences but sometimes precautions just aren't enough. By the morning my skin was so raw and swollen the thought of having to use the restroom again pained me and while trying to get ready for work I debated every move and required my husband's help so that I wouldn't bend down or walk further than necessary. Any movement agitates my system and stimulates my SBS to occur that second instead of my 5 minutes later, so I have to stop moving and stay seated as long as possible.

Usually my episodes end before I have to get up the next day. They may last all evening and into the night but typically are over once it's time for a new day to start. Other times they may last during the day, which is when I require my wheelchair if I'm away from home. If I don't have my wheelchair then I'm a nonstop speed racer until I can get to a place I can sit or lie down, I've been known to leave friends and family struggling to keep up with me during those times. I have to though if I want to start curtailing the episode. Sitting helps the most. Lying down doesn't really help unless my legs are elevated, causing my torso to become bent and thereby forcing my intestine to have some more loops or bends to it so that it can start to slow down.
The occurrence of such episodes has in general reduced over the years. During the years following my "healing" surgery in 2001, these episodes were frequent and for about 6 months to a year, almost nonstop. My doctor asks me every few months if I want to return to have an ileostomy because of my SBS and episodes. I continue to tell her that it's not a severe enough problem for me to consider returning to having an ileostomy. Having a flare up even once or twice a week is worth it for me. I'm grateful that ostomies save lives and improve lives for so many and is an alternative option to death. I'm so grateful for the advances in ostomy care and appliances to make living with an ostomy more comfortable and convenient.
I never felt feel free or myself when I had an ostomy. I think that's because I never truly accepted the ostomy or that I was meant to have an ostomy, not permanently. When I was 10 I was told that my temporary ostomy would now be permanent as there wasn't enough rectum or tissue left to for an anastomosis anymore after all my complications. I never believed my surgeon, I also didn't trust my surgeon and hated him with all my 10 year old might, so I wasn't likely to trust his word regardless what he told me and my parents. Besides ignoring my parent's concerns and questions, ignoring my symptoms and my voiced concerns, and royally screwing up surgeries, he couldn't even remember if I had 1 or 2 kidneys, if he removed a kidney or not, and if I did have 2 kidneys if they both worked! My parents and I still don't know why the topic of my kidneys even came up during my 1st year of surgeries. He just randomly told my parents one day that I was missing a kidney, then later said he removed a kidney, and then later said I had both kidneys but one didn't work, and then later said I had 2 working kidneys and admitted he couldn't remember. WHY was this person a surgeon!? My parents though, being new to having a child with medical issues, were too naive at this time in the medical field to push the issue more. Looking back with the knowledge and understanding my parents have gained, frequently stated they should have demanded a different surgeon and sued this surgeon for malpractice and incompetence because he shouldn't have been practicing. Okay, rant over...for now.
I held on to the belief that one day I wouldn't have an ostomy any longer, one way or another. I prayed every day, frequently, for a miracle. I pleaded to die, like so many times I should have died that one year, if I couldn't have my ostomy reversed. For 6 years this went on until one day my doctor told me that after reviewing my annual colonoscopy, it may actually be possible to have my ostomy reversed. She warned me that it was not a guarantee and may fail but I could try it if I wanted to proceed with the attempted reversal surgery. I didn't have to consider it, I immediately stated I wanted to try it. I told my parents to tell me as soon as I woke up from surgery if the reversal was a success or not. When I was returned to my hospital room, I struggled to keep my eyes open through the hazy daze of anesthesia and Demerol from the surgery, terrified that the reversal didn't work, I looked over at my parents with half opened eyes and gathered enough strength to make a thumbs up. The sign to my parents that I wanted to know now what the outcome had been.

I refuse to talk or move my head when I have an NG tube. I don't care what the circumstances are or how painful it is to remain in an uncomfortable position for days. It's just like when I have an IV - no one is going to get me to bend that arm for anything because I will take every precaution to make that one IV last my whole hospitalization.

I was terrified that the reversal wasn't possible and finding out that it wasn't, I was afraid I would go into hysterics causing severe pain from sobbing uncontrollably and thrashing about fresh from surgery. I was afraid of the anxiety of not knowing for hours, left wondering as I drifted in and out of consciousness until the anesthesia wore off enough for a more lucid self. But I risked all that, I couldn't wait to find out, hopeful it all worked as I so whole-heartedly, fervently believed it would for years. My parents saw my gesture and told me what I longed to hear, "It worked". I relaxed and with a weak smile, closed my eyes and went back to sleep.
I've gone through too much since then and my health has made a practical 180 to what it was the year after my reversal surgery to give up on my straight pull thru and return to an ostomy. My health doesn't warrant it at this point. And so I keep my resolve to endure the SOS of my body during an SBS episode, the occasional emotional release of pent up pain and mental exhaustion and I remember that in a few hours or a day, it'll be better, my life will resume and I'll be alright. And it always is.

When your body is sending out an SOS, listen to it and follow the care recommendations for it and reach out to others to support you through the crisis. Whatever the outcome, such steps will help and you'll get through it one way or another.
Posted by Jenny at 6:29 PM