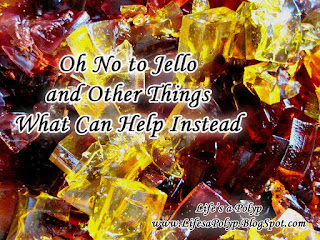 Recently I was offered a protein jello shot, before I could finally form words to say no thank you, all I could think was Hell No! The jello reminded me of how much our tastes can change and vary due to chronic illness.

As a kid I liked jello. I had fun making different shapes out of jello with my mom and playing with the jiggling shapes before slurping up pieces of the gelatin and trying to chew the mess that only became broken into smaller and smaller pieces of slimy, jiggly pieces before I finally gave up and just swallowed all the tiny chunks. It may not sound like I liked it by my description, but how else do you describe jello? It's a strange concoction.

This would all change though after my 1st surgery and the time following this period. For days I could eat absolutely nothing and once I could have some type of subsistence, it was just liquids for days. And this cycle repeated itself for a year. The point came when I refused to eat the jello on my hospital food tray. I drank the broth, sucked on Popsicles and crunched on ice chips but the jello was always returned untouched no matter how hungry I was and that's how its stayed throughout my adolescence and adult years. I abhor jello now, the site only floods my mind with memories of hospitalizations and restricted diets. I've never even had a liquor jello shot!

In A Look Back I chronicled my high school experiences and graduating to different diet levels after my 7th surgery. After I graduated to chicken and rice only as my lunch and dinner meals for weeks, it took me a long time to eat chicken and rice again. The thought and smell of it turned my stomach. For weeks I could only have an egg for breakfast, although I became tired of this, it wasn't as revolting as chicken and rice became.
After about 8 years, I started to love plain chicken and rice and even crave it at times! It reminds me of those extremely restricted diet periods, but it doesn't have even near the effect as jello does on my mind, taste buds and stomach.

In high school after my 6th surgery, when I was returning to a regular diet the only foods I could tolerate were custard and bacon. My favorites tasted disgusting and smelled even worse to me. My doctor threatened me with various aversive situations until I finally relented and forced myself to eat more than just a small custard and strips of bacon for every meal. Now, I still love custard but I cringe at the thought and sight of bacon. Not because I don't like it but because every time I'm presented with bacon, I hear my doctor's voice lecturing me daily about bacon - "Bacon is only fat, barely any protein. You have to get your protein up and bacon isn't going to do anything for you. You're eating straight fat, that's all it is."
I still won't drink protein shakes or eat protein bars and will only drink bullion broth if it's my only choice.

My times without food became quite comfortable and I thought it wouldn't be a bad way to die. I didn't have pain from lack of food and perhaps that is because when I don't eat for a while, my stomach finally calms itself. As you may recall in Evils of Food, food has quite the opposite effect on my body that most people experience from food.

It's hard to get our appetite going again after being on npo or liquid only for extended periods of time. Food just isn't appealing anymore. We have to quite literally force ourselves to eat again otherwise we'll never get our appetite back. It's a huge pain to do so and can even be painful, but it's a must if we want our body to recover. Without nutrients, especially protein, our body has further reduced immunity, lower energy and strength levels. It takes a lot to get albumin back into range after illnesses and it's going to take a few months to get it where it needs to be. But it will be worth it. With appropriate albumin, our muscles repair themselves, the immune system is more capable of fighting viruses and illnesses, we become stronger and have more energy for necessary activities and our electrolytes start to become balanced again so that we aren't malnourished and at risk of the effects of too high or too low nutrients.

A few tips I have learned from my hospitalizations, severe dehydration and malnutrition are: