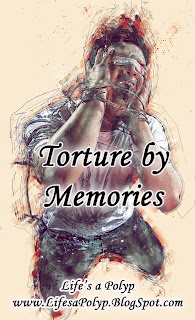 I keep thinking back to that "year of torture" and I realized I've never actually said what really went on during that year, I've briefly glossed over it when I first started this blog but nowhere else, whereas I have told about my year of constant crisis in high school.

I decided I will try to retell that year and the few memories I have. Mind you, this started when I was 9 and the year ended when I was 10 and my mind has tried it's best to protect itself through repression resulting in a haze of memories that are pieced together like a mismatched jigsaw puzzle.

And so I shall begin.
I don't actually remember the conversation my parents had with me about having my 1st surgery, I just remember that I knew it was coming and that I had to do as my doctors and my parents instructed.
I don't really recall any feelings of fear or anxiousness during this time. The plan was to have total colectomy and jpouch and after healing have the take down surgery.

One thing I will never forget though is when I forgot I was fasting for the surgery and I ate potato chips. I was scared at that point - debating if I should tell my mother or not, knowing that if I didn't that it could mean something bad with the surgery, fearing what would happen though if I did tell. Being the follow the rules child I was, I told my mother. I don't know if that really was the best choice or not because I got a severe punishment that day or the following day. A team of nurses came out to our house and repeatedly attempted to insert an NG tube through my nose, down my throat to insert a fast acting laxative so that the surgery would not require postponing.
This incident in itself was pure torture. I remember being told and forced to sit up while I screamed in agony, repeated attempts to insert this tube that would not cooperate. After countless tries, I was finally told to lie down and my parents helped keep me still and the tube finally cooperated. A metal coil that was in the tube was pulled out, feeling every centimeter of that coil painfully hitting the walls of my nose and esophagus as it was yanked out and liquid began to rush through the tube into my stomach to work it's magic through my then fully intact intestines.

This was my first experience I remember.
I don't remember the endoscopies and colonscopies before this that found my pre-ulcerous condition from stress and anxiety and the FAP polyps nor the ones that later monitored my FAP polyps that led to the final decision for a total colectomy. I remember seeing several PCP's prior to all this as my parents needed a referral for me to see a GI specialist as I was having constant abdominal pains. My parents were repeatedly told by PCP's that I was merely a "whiny child". Finally, a PCP listened and I saw my GI specialist, who is one of my saviors. I remember I started seeing my GI specialist in 3rd grade and end of 4th grade I was having surgery and this was it's horrible beginning.

I had my surgery and my stoma was on the left side, in spite of my parents voicing concern to the surgeon prior to surgery of the placement of my stoma. Everyone else in my family with an ostomy has their stoma on the right side and the different location of my stoma alarmed my parents. My parents' concerns were dismissed  by the surgeon, stating that the way my organs were arranged the left stoma was preferable and there wouldn't be too much lax in my intestine.

I will not bore you with details of each hospitalization or surgery as I don't recall most of them anyway!
What I do remember is that sometime during my recovery after my 1st surgery, that the area of my incision became infected and I had to return to the ER and a large needle stabbing me in the thigh with morphine immediately before my abdomen was cut open, the new incision was rinsed and packed with gauze. I really don't know why I was given morphine for this because it was not as though any time was allowed for the morphine to take effect. I screamed bloody murder while I was being cut open, a solution sprayed into the incision, fingers roughly gracing the inside of my incision and pieces of gauze being jammed into my open wound. During my agonizing screams, I remember hearing my mother's voice telling me to quit screaming because I was scaring the other children in the ER. I began to hate that hospital at this point.
Side note: This sounds extremely callous I realize, but please don't get the wrong impression of my mother. She is very caring and lovingly tends to me whenever I am in need. I am forever grateful to both of my parents and love them dearly.

Before too long I was back at the ER again for severe abdominal pains, I did nothing but cry and couldn't sleep. My parents rushed me to the ER during the night what felt like an insanely high speed to get me there as quickly as possible. An x-ray was done and nothing found. I was dismissed and my parents were told that I was just a "whiny child" and to take me home as nothing was wrong with me.
My parents took me home, feeling helpless as the pain medicine did very little for my pain. The next day my parents took me back to the ER as I had no improvement in pain and symptoms.
Fortunately this time, someone in the ER had more sense than those working the night before and more testing than a simple x-ray was completed. These additional tests found that my intestine was too lax and had looped around itself and my other organs causing some of my small bowel to have already died and risking the other organs in its' grasp. Full blown emergency surgery was done to remove the dead intestine and dead jpouch, release my organs and my stoma was moved from the left side to the right side, as my parents had originally requested. Are you seeing a trend with this surgeon yet?

I continued to have surgeries from the complications until finally the ostomy was deemed permanent due to inability to reattach my ends. I recall very little about these other surgeries during that year. I'm not even sure the timeline of the remainder of my fleeting memories. The only memories I really remember are outlined below and all occurred during those hospitalizations:
Outside of the hospital I remember being forced to go on walks around the house to regain strength and foolishly, painfully somehow doing a flip over a bar on my playground, just because I hadn't gotten to in such a long time. I was lucky I didn't rip open my incision or fall from the pain that foolishness caused. I had frequent, extreme nosebleeds from the multitude of NG tubes that irritated my nostrils raw. The blood literally pouring from my nose unexpectedly filling containers until finally, my skin would start to clot off the outpoor of blood. The damage would last for over a year before fully healing. My mother home schooled me for my 5th grade year due to constant hospitalizations and never fully recovering my health until 6th grade, when I was still underweight from malnutrition yet healthy enough for activity. During 6th grade a consulting specialist  to my GI specialist attempted to persuade my doctor to give me a feeding tube because of my malnutrition and being significantly underweight, diagnosing me as anorexic. My doctor quickly corrected him in his error. She realized I was not underweight out of choice but out of accustomed behaviors to the extended periods of time without food from the hospitalizations and surgeries. It was this year that I was, however, placed on a high fat diet with sole mission of gaining weight.

And so a new chapter of my life started in 6th grade - it too would be a painful one as half way through the school year I became bullied by all I knew except for 2 classmates, that stood by me. I was determined to make a fresh start the next year. And so I did, and it was a turning point in my life but I didn't escape the anger and resentment I felt for all those bullying students and it would lead to danger within myself that would later implode in highschool.

And so too frequently is the tortured life and soul of one with chronic, invisible illness, so rarely understood by others that are not part of the same club. Sometimes it is a good thing to not be able to remember the past. Fortunately, the memories we are unable to erase allow us to bond more deeply with others who have similar experiences and memories. With the help of one another, our broken souls can begin to mend.
Posted by Jenny at 4:55 PM

Email ThisBlogThis!Share to TwitterShare to FacebookShare to Pinterest
Labels: history