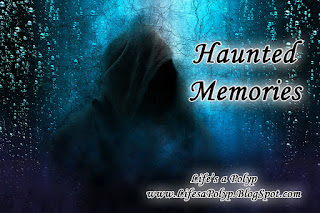 There are some physical sensations and memories that will never be erased until the mind fails in it's own ability to be mindful of the past and the body begins to become numb to itself.

Such haunting memories and sensations make forgetting the pain we've suffered impossible and refresh our terrors of the past, and for too many of us - the PTSD that battles for constant hold over our psyches.

In high school when I started counseling for the 1st time, I was diagnosed with PTSD, for years I had been experiencing all the classic symptoms and continued for years after beginning counseling.
Besides the obvious experiences that trigger such symptoms, I recall random times and memories that to this day haunt me. One night of the night terrors left me mentally and emotionally fragile, my parents recognizing the pain inflicted allowed me the privilege to remain at home that next day from school that I could recover myself.  I recall that night so vividly that I am still terrified I'll experience such a vivid night terror again. My parents have always been and continue to be understanding of my symptoms, fears, and anxiety and have been a strong support to soothe me back to safety.

There are still times that I have the physical sensation that I still have one of my 2 stoma sites.

Side Note: My first ostomy placement on my left side caused my intestine to twist and make a knot over my other organs that resulted in my first near death experiences. Once my surgeon and the children's hospital finally believed me that I was not just being a "whiny child" and something was seriously wrong, that site was taken down and moved to my right side.

The sensations are so strong that I am compelled to touch my stoma sites to ensure that I do not indeed, still have an existing stoma. It is one of the oddest physical feelings and I can't even describe it other than what it feels like to have a stoma. Only those with a stoma can understand the sensation.
Other times I wake up randomly with the sensation of still having an ostomy and the innate behavior of checking to see when I will need to empty the pouch, positioning my body so that I'm not lying on the pouch but also not lying too far from the bed causing a strain on the pouch as it would fall from my body pulling against the seal made, thoughtlessly mimicking the once natural behaviors of emptying the pouch, the burning sensation of raw skin around the stoma, and instinctively jumping out of bed to "empty" the pouch before it becomes so full and leaks.

I don't know if one ever truly stops having PTSD or if symptoms simply become dormant after a better sense of resolution is achieved through counseling. I rarely have PTSD symptoms anymore, but I also am not faced with health crises as frequently as in the past. During medical tests, even as simple as a CT Scan with Contrast, I notice symptoms starting to creep in on me again.

Instead I am more frequently haunted by these physical sensations and memories that lurk behind the shadows of time, reminding me that although now safe, times can change at any moment - never to let me forget.
Posted by Jenny at 8:53 PM