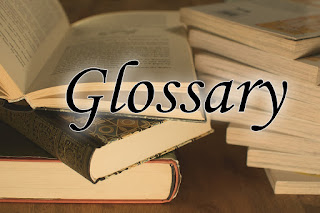 This is an anatomy and ostomy glossary to help those unfamiliar with the body and surgeries associated with Familial Adenomatous Polyposis and other bowel or bladder disorders. Also see my video describing ostomies


Colon (Large Intestine) - located between the small intestine and rectum. The colon removes water, salt, and some nutrients thereby creating stool. The ascending colon travels up the right side of the abdomen, the transverse colon runs across the abdomen, the descending colon travels down the left abdomen and the sigmoid colon is a short curving of the colon, just before the rectum.

Rectum - the final, or terminal, straight portion of the colon connecting to the anus

Anus - at the end of the rectum, the anus is the opening where the gastrointestinal (gi) tract ends and exits the body

Bladder - a muscular sac in the pelvis, above and behind the pubic bone, that stores urine

Ureters - tubes that carry urine from the kidneys to the bladder

Proctocolectomy - removal of the rectum and all or part of the colon.

Total proctocolectomy - removal of the colon, rectum and anus


Stoma - a surgically created opening in the abdomen surface constructed of intestinal tissue for an ostomy. Stool or urine leaves the body through this opening instead of the anus or urethra


Colostomy - a surgically created opening between the colon and the abdominal surface. A colostomy can have a loop stoma (one stoma with two different openings due to a loop of the large intestine being used to create the stoma), end stoma (end of the colon is used to create the stoma) or loop-end stoma (looks the same as a loop stoma but is connected differently internally). A colostomy can be created at any of these four sections of colon and the type of colostomy is identified by the location of the stoma along the colon

Urostomy - a surgically created opening that allows urine to pass, may also be called an ileal conduit


Ileal Neobladder - continent urostomy where the pouch or reservoir is made from the small intestine and the outlet is the urethra, with no stoma

Straight Pull Thru - also known as an ileoanal anastomosis where the large intestine and the lining of the rectum is removed. The small intestine is connected to the anus.


Whipple Procedure - also known as a pancreaticoduodenectomy to remove the head of the pancreas, duodenum, gall bladder and bile duct

ERCP - Endoscopic Retrograde Cholangiopancreatography is a specialized technique used to study the bile ducts, pancreatic duct and gallbladder. Treatments that can be completed through ERCP include:
Sphincterotomy - cutting the muscle that surrounds the opening of the ducts or papilla to enlarge the opening
Stone Removal - removal of bile duct stones
Stent Placement - stents placed into the bile or pancreatic ducts to bypass strictures of the duct
Balloon Dilation - inflation of a balloon to stretch a stricture
Tissue Sampling - samples of tissue may be taken from the papilla and bile or pancreatic ducts


Desmoid Tumor - a rare disease that is common among those with Familial Adenomatous Polyposis that creates noncancerous growth in the connective tissues that provide strength and flexibility to structures such as bones, ligaments, and muscles. These tumors can develop anywhere in the body although most often are found in the abdomen, arms and legs. Desmoids can grow into nerves or blood vessels and exert pressure on other organs. Desmoids are also known as aggressive fibromatosis

Sessile Polyp - polyp that is slightly flattened and broad based

Serrated Polyp - polyp that has a saw-tooth appearance, can be sessile or traditional serrated

Adenoma - a precancerous polyp that is a gland like growth on the mucous membrane that can have a growth pattern of tubular (protrudes), villous (flat and spreading), or a mix of the two called tubuvillous

Counting on the Best

In honor of the year closing and the tradition of new year's resolutions, look back on the year and consider what you would like to b...