Colon Cancer: A Family Tribute and A Reminder 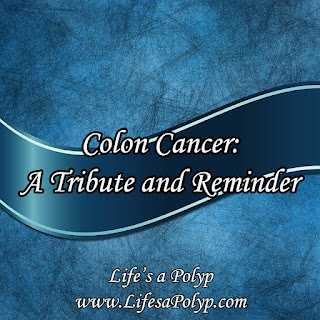 This March, Colon Cancer Awareness Month, hits harder this year than those previous. Colon cancer runs in both sides of my family and as a person with the hereditary colon cancer syndrome, Familial Adenomatous Polyposis (FAP), I particularly know the importance of colon cancer screening firsthand.

Due to my FAP, I required my colon to be removed at age 9 as my precancerous polyps were starting to turn cancerous. A fact that was difficult to obtain as my primary care doctor had refused me the necessary referral to be evaluated by a GI specialist - a refusal that could have cost me my life.

Colon cancer goes beyond me though. FAP runs in my mother's family. She was diagnosed with colon cancer just 3 months after I was born. My grandfather had FAP and had colon cancer as well, he later died from stomach and esophageal cancer caused by FAP. Both of their stories can be read in Touch of Cancer.

Beyond my grandfather, other members in his family likely had FAP including his sister, mother and her two brothers, three cousins, and two nieces. Beyond that, we are unsure who else has since had FAP among their family lines.

Colon cancer also runs on my father's side of the family. In his family, my grandmother died of colon cancer and two of my aunts have had it - one being my aunt Martha who we recently lost.

My aunt Martha was extremely healthy her entire life until she developed colon cancer - likely about a year or so ago. Good genes and long life run in my dad's side of the family - several family members living into their 100s. My dad is the youngest of 7 siblings - the oldest one is still in good health at age 89.

Martha was 83 and could have likely lived a much longer life if she had completed the recommended colonoscopies to prevent colon cancer. She never went to the doctor as far as I'm aware of since becoming an adult.

She began having symptoms of unexplained weight loss, bloody stools, change in bowel habits, loss of appetite, weakness. We weren't aware of all of these changes - only the weight loss. She wasn't diagnosed with colon cancer until mid-February 2022 when she was basically forced to by my parents after she fainted upon answering her house door. As it was told to me, she figured she had colon cancer just like her mother, but she had been refusing to go to the doctor or hospital out of fear of never returning to her home. Unfortunately, once she finally agreed to be evaluated, she was diagnosed with colon cancer with metastasis to the liver and lungs that was terminal and given 8 weeks to live.

Sadly, we lost her on March 22, 2022 - 5 weeks after diagnosis. My last visit with her she was barely able to speak and hard to understand, she had difficulty staying awake. We were fortunate to have hospice care available to keep her as comfortable as possible during the last weeks of her life as the pain did become increasingly worse.

Please take heed from the story of my aunt Martha and complete your recommended colonoscopies for prevent colon cancer in yourself. Please go to the doctor regularly and notify them of any changes in your health, any symptoms you experience. Please do your best to not be another colon cancer statistic.

My Tribute to My Aunt Martha

My aunt Martha was a steadfast, loved, and integral presence in my life. She was one of several family
members who literally helped raise me from the age of 3 months. She spoiled me to no end as a child whether it was ensuring I had plenty of my own clothes to keep at her house, displaying my portrait on her mantle, or unnecessary gifts such as my 3-foot christmas stocking full of items.

She taught me to enjoy a variety of word puzzles, jigsaw puzzles, solitaire, and mahjong.

She supported everyone in her life, she was always in everyone's corner no matter what. She showed her love through gifts and loans to support others in their life goals and interests. She was ever giving and generous to a fault. She constantly put others ahead of herself even if it caused herself harm. She was ever more concerned about others, their feelings, and not wanting to inconvenience others than she ever was about herself.

If she discovered something that you liked, she would surprise you with a gift of that item even if that meant trying to give you her own possession. Even when she was in her last weeks of life, she wanted to read my children's book to show her support.

She was an avid believer in the power of positive thinking. Every time when asked how she was, her favorite response became "I'm phenomenal!" and said with as much enthusiasm as possible.

She was notorious for bad directions and odd quirks. During one trip to Texas, a route she had driven a multitude of times, she suddenly exited somewhere unfamiliar to me. When I asked her where we were going, she responded "I don't know, I just followed the line". She was able to laugh at herself during such instances.

She was my aunt, who I have held dear in my heart since infancy and will forevermore continue to do so.