What I Learned From Divorce 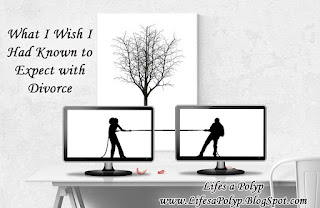 When I divorced, I never could have been prepared for what to expect. No one tells you what you should expect, there is no handbook. Your world is turned upside down and you feel like your life is out of control. You simply live in trial and error and commiserate with other divorcees who can relate to your experiences. There is so much you learn during this period that can last for years even. The navigating, the learning may never cease. I'm only two years post divorce and although my married days feel like a lifetime ago, they remain with me although diminished in intensity.

From the initial moment I made the final and clear decision to end my marriage I began to experience an exhilarating time; I was filled with emotions of relief that were freeing to my mind and soul. I no longer had to hold on to the stress and worry that had accompanied me for the months previously while I battled depression and the stress of trying to hold on to everything while maintaining my sanity. With all this freedom, my energy levels soared as I was no longer burdened by immense stress. I started exercising, I could hardly sleep due to my abundance of energy and my excitement for the possibilities of the future. I felt limitless and carefree, unburdened by my final decision.

I began to re-enter the dating world shortly after, as is a common occurrence. Looking back, I realize now that a divorced individual is a mess for at least a year following the divorce and for that person's own sanity and sake, really shouldn't enter into relationships during this time. Refraining from re-entering the dating world for a year would be a very difficult commitment for most individuals. As humans, we long for companionship and intimacy with others. We tend to enjoy the thrill of finding potential new partners and participating in the dating realm. We feel desired by others giving us attention after an ordeal such as a divorce. The options for potential partners is an exciting new world that is reopened to us. It's a thrill that is hard to deny. The first year particularly is for a time of healing and rediscovering one's self. I had an intense amount of energy and drive for my limitless future but my mind was so scattered and pulled apart by all the options that now laid available to me. My mind raced between options and even though I set goals and plans for myself, I didn't stay with a plan for long before racing to another idea and option. It must have been exhausting for anyone listening to my rambling ideas and trying to keep up with my racing mind. Just as I wasn't ready to commit to another relationship, I wasn't ready to commit to even a singular life plan.

I was not ready for an emotionally invested relationship. I began to become terrified of relationships and kept a cold, emotional distance between myself and others. I've never had a great record of dating and I figured this time around wouldn't be any different; only this time I wouldn't marry again. I would forever be entering and exiting dating relationships. I vowed to myself that I would never allow myself to become lost to another, I would maintain my physical, financial, and emotional independence from another. Relationships became an "easy come, easy go" mentality for me as I kept distance between myself and a partner. I began to view relationships as impermanent. I survived what I thought I wouldn't - losing the person I considered my soulmate and life partner. If I could survive that and be happy again, then the same is true for any future relationship; I will survive any relationship ending. I wouldn't allow myself to become overly emotionally invested and as a result, a failed relationship was merely an inconvenience that could soon be replaced by another potential suitor. I spent a year dating men younger than myself and I learned to appreciate men who were closer to my own age. Not only was I not emotionally available but I also didn't want to deal with immaturity or drama. I had experienced enough drama with my own divorce, I didn't need or want additional drama brought into my life by another individual. I wanted simplicity and partners who themselves were an emotionally strong individual. I was tired of being the emotionally strong person all the time. I wanted someone who could stand their own. Although I have allowed myself to find a deep love again with the intent for building a lifetime together, I maintain a conscious eye on my independence. I've learned that with the right person, I don't have to keep a cold, emotional distance between ourselves as a means to protect myself. I can let another into my heart and remain independent and maintain a healthy self. Becoming cold and distant does not make a healthy relationship and now that I've re-opened myself to a deep and loving relationship, I am much happier than I was in previous relationships. In spite of finding a deep love, for good or bad, without any effort I maintain the view of relationships being impermanent.

While navigating the divorced world, I realized that all my new moments are tainted by past memories and experiences during my marriage. This has lessened with time, but there are stinging moments that cross my heart as I remember a time with my now former spouse or when I am embarking upon a new adventure that would have been with my former spouse if divorce had not occurred. It was quite painful as such events would trigger a flood of memories and grief over what was and what was supposed to be. I had a difficult time coping with vacationing and buying a home on my own rather than with my former spouse. I felt as though everywhere I turned, there was a tainted moment that should have been experienced with my former spouse but now was my sole experience. The sting has diminished in intensity and length, but it remains even though fleeting as it is.

My life changed drastically upon my decision to divorce. I gave up a lot but gained a lot in the end. Divorce was not an easy decision; working my way to that final decision was soul wrenching and I spiraled in a well of anger and depression. It was not an easy transition to make, the transformation of myself couldn't be rushed. But as my heart and mind began to heal though from the aftermath, I've come to love my life and everyday I am grateful for this new, even surreal life. 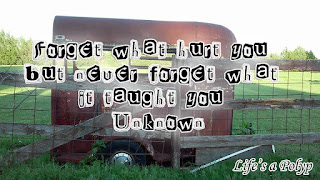 The upheaval of divorce varies from person to person and situation to situation. This may be
exacerbated any time divorce is contested or involves minor children or property. The entanglement of finances alone can cause extreme stress and friction.

Even when you do your best to maintain independent finances and property from your spouse, I learned that there is always entanglement. If your spouse has financial difficulties, it can be linked to you even when you didn't share finances or property. With this ongoing entanglement due to a previous legal connection to an individual, I realized I wished I had changed my phone number after the finalization of divorce. Years later and I still receive random phone calls connected to my former spouse.

Fortunately my divorce was civil; we even said we would always be there for one another if the other needed. Perhaps this was naivety and wishful thinking in the freshness of our separation. We still have one another's phone numbers and whenever I have questions about anything, he's always willing to provide answers. But would I be able to truly count on him if I needed something? I'm not so sure of that now with the passing of time. Perhaps but perhaps not. With all our civility and promises to one another, I was shocked when I suddenly discovered he had removed and blocked me from his social media platforms. I should have expected it. We weren't what anyone would consider friends anymore. But it was still a shocking realization for me. With one less person in my support system, I had to accept that I may need to lean on my existing support system more heavily due to my health but I also needed to be more independent myself. Our mutual friends now became his and mine; I no longer had his family and friends to call on.

Divorcing was a heart wrenching decision but ultimately it was the best decision for me. It would have been nice for things to have turned out differently, but they didn't. For myself, I must let go of any regrets and instead find my peace and enjoyment in everyday life wherever and whenever I can as I navigate the divorced world.


Other divorcees shared with me what they wish they had known to expect or what they had learned from divorce. See what others had to say:

What are some lessons you wish you had known prior to divorce?
Posted by Jenny at 4:30 PM