The UNREST of Chronic Fatigue Syndrome 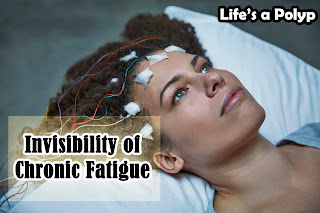 We all have memories of things or times that we cling to from our childhood that fill us with nostalgia. For me, some of those things include the tv shows my mom watched. I've always had an adoration for the shows MASH, Golden Girls, Designing Women. I don't have distinct memories of these as a child, I just know I watched them with my mother and that adoration carried through into adulthood. When I watch these beloved characters of these shows, I'm reminded of my childhood - a time before I was sick.

Golden Girls resonates with me as the four women in their golden years tackled everyday issues and brought light to important issues - even that of invisible illness and rare disease. I believe the first time I heard of Myalgic Encephalomyelitis (ME), or Chronic Fatigue Syndrome (CFS), it was through Golden Girls as the character Dorothy was diagnosed after seeing multiple specialists and even dismissed as being stressed and old until one day she finally received the correct diagnosis. This episode, Sick and Tired, aired in 1989 and yet there still isn't enough known about this severe invisible illness. Individuals with ME/CFS are still at risk for being treated as though their symptoms are psychological in nature not biologic.

﻿
Jennifer Brea shows us an eye-opening yet terrifying glimpse into the world of ME/CFS in her film UNREST. Jennifer started to experience symptoms of ME/CFS approximately 5 years ago after having a high fever. Like others experiencing difficulty obtaining a proper diagnosis, she saw multiple specialists and was diagnosed with Conversion Disorder by her neurologist before the ME/CFS diagnosis. Seeking answers to her symptoms, she started documenting her daily life and began networking with others in the ME/CFS community around the globe.

ME/CFS tends to develop after an infection and is more prevalent among women than men. It's a spectrum disorder meaning one can have varying levels of functioning ability and severity of symptoms. With any invisible illness, some individuals are left bedridden while others are able to appear to function without issue in their daily lives and one day is not necessarily like the next.

Symptoms include:
In UNREST, Jennifer shares not only her story but also those of others she has connected with online. We're reminded that invisible illnesses share commonalities across diagnoses - we're often mistaken for healthy and fully functioning, we're often judged for what others do not see as we hide behind closed doors in the comfort of our homes to recover from our symptoms, particularly during a flare. We find common ground and belonging online where we can reach others who are hard to find in person due to the distance among us and the physical demands that are required for travel.
National Organization for Rare Disorders considers ME/CFS a rare disease yet 15-30 million individuals around the world are estimated to have this disease. Like many of us with invisible illness, Jennifer turns to the internet and others with ME/CFS for possible remedies to help reduce her symptoms. She does find some remedies that are helpful in the management of her symptoms but remains captive awaiting for more scientific advancements for treatment. Funding for ME/CFS remains at a low level further hindering the scientific discoveries and treatments necessary to better treat this rare disease. With the help of others, protests were arranged throughout the world to raise awareness to the "missing millions" of individuals with ME/CFS and the need for more research funding.

For those of us with an invisible illness, I believe we can relate to one another without having the same diagnosis. We may share symptoms but we share much more than that. We share the pain and heartache, the physical and financial burdens, and the upheaval of our lives. We share the stigma of invisible illness that remains misunderstood by others outside of our illness communities.

Together we are stronger and louder, regardless of the diagnosis. I encourage you to watch UNREST and look into the world of ME/CFS so that we may better understand and improve our ability to advocate for rare disease.