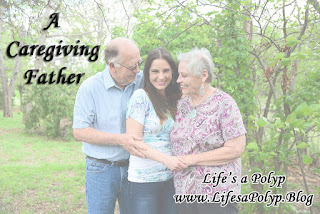 I've been blessed with two of the best parents any individual could dream of having in their lives. There isn't enough time or enough words to properly describe the depth of my love and admiration for my mother and father. I am often overcome with overwhelming gratitude for each of them. I am in no way unaware of just how blessed I am to be their child. I have a special relationship with both of my parents. And although I am happy to sing both of their praises at any given moment, I dedicate this to my father.

Today celebrates Father's Day in the US and marks the end of Carers Week, celebrated in the UK. Why are these two celebrations intertwined for me? Because my father is a double duty caregiver. My mother also has Familial Adenomatous Polyposis (FAP) and Short Bowel Syndrome. Together we walk the life of chronic illness - the same chronic illnesses. She is no doubt my hero and my inspiration for living chronic illness with grace and dignity - to the best of my ability. However, my dad is my rock and her rock as well. My mom is more than willing to help provide caregiving to me when I'm in need but she does have limitations due to her own health. Fortunately for the both of us, my father is in good health and is able to provide caregiving to both of us. Sometimes even simultaneously, such as during my childhood when my mother and I were both hospitalized at the same time. My mother opted for admission to the adjoining children's hospital I was admitted to in order to reduce the burden on my father. A sacrifice I will never forget as this was not her hospital of choice nor would it be mine as an adult.

Not only has my dad been the provider of our family and our rock but is he is also ever willing to provide care when needed. My father married my mother without much expectation or anticipation of what was to come. My mother knew she had FAP but never dreamt it would affect her or any future children the way it has. As you can read in her story at Destination XRide's Mom's Corner, she anticipated her life with FAP would be much like her father's had been throughout her life at the time.

My birth would mark a change for my mother and grandfather's health with FAP. Later my grandfather would require radiation that wreaked havoc among his body and an ileostomy. Eventually, we would lose him to FAP polyps in his stomach that developed into stomach and esophageal cancers. But until this point, he simply lived with a limited effect of FAP. He remained active and in relatively good health for having FAP. This was my mother and father's expectation for my mother. 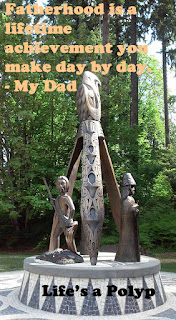 The reality became clear though a mere 3 months after my birth. My mother had colorectal cancer and not only would it claim her colon leaving her with an ileostomy - it would nearly claim her life as well. My father, a spiritual person, laid his fears and concerns out in prayer and surrendered to whatever would occur - losing his wife of 5 years and becoming a single father or being able to live his life intact with both is wife and their sole child. Children, especially babies, weren't allowed in the hospital ICU unit where my mother was receiving critical care. Yet the nurses saw my mother barely hanging on and let my father bring me in to see my mom. I've imagined this visit countless times in my mind's eye. These visits proved to be a source of strength for my mother as she recovered to continue her marriage and raise her daughter. The doctors though would advise my mother to not bear anymore children as her life depended upon it.

My parents' lives drastically changed with my birth - not only did they welcome a daughter into their world but they also were forced to welcome chronic illness into their world as well. My father never let this alteration in their life plans hinder or alter our lives more than necessary. He graciously accepted the role as caregiver to my mother and later to myself as well. With great love and care, he consistently provides for us in any fashion we need. He is indeed our rock and we are far better because of this life foundation he provides without hesitation.

To all the fathers out there who meet the needs of their families and provide the ever life saving caregiving required, Happy Father's Day indeed.
Posted by Jenny at 4:30 PM