Hydration via Speedlyte: A Review 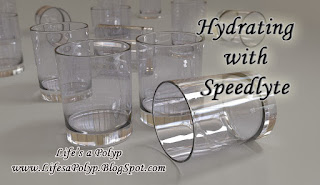 Disclaimer: I have been given this product as part of a product review. Although the product was a gift, all opinions in this review remain my own and I was in no way influenced by the company.


Hydration is an essential key to living well as a living being. However, for those of us whom are missing parts of our intestines, dehydration can be a dangerous game. Without our full intestines, we are easily at risk of dehydration which increases our risks of electrolyte imbalance, cramps, fatigue, lightheadedness, intestinal blockages, and increased stools which worsens dehydration.

Even though I live with a straight pull thru and have Short Bowel Syndrome due to removal of my colon and part of my small intestine, I am not a keen observer of my own hydration status. I drink liquids when I'm thirsty and I tend to drink a fair amount of coffee and tea, which both further dehydration due to their caffeine content. I don't typically experience overly bothersome effects of dehydration. I'm not prone to intestinal blockages or cramps and my electrolytes have been remaining stable during blood lab checks.

My mother, who has an ileostomy and Short Bowel Syndrome, suffers with dehydration on a daily basis. In addition, she has Diabetes and Restless Leg Syndrome. With her combination of medical conditions, she experiences electrolyte imbalances that cause severe daily leg cramps that are so painful she is brought to tears on a regular basis and experiences partial intestinal blockages on an almost weekly basis.

So when I was contacted by Einsof BioHealth regarding a hydration product, I immediately thought of my mother's frequent dehydration. I have been given this product as part of a product review. Although the product was a gift, all opinions in this review remain my own and I was in no way influenced by the company.

I received Speedlyte, a product for Pediatric and Hypotonic Dehydration. When I approached my mother about using Speedlyte to improve her leg cramps, she was interested and sought the medical approval of her doctors. My mother was diagnosed with abnormal kidney function and must be mindful of the products or medications she utilizes. Her Gastroenterologist and Nephrologist both approved her use of Speedlyte to boost her hydration. 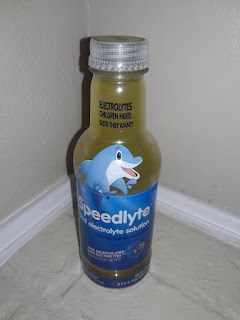 Speedlyte was designed to increase absorption up to three times faster thereby requiring less volume of liquid than other products by utilizing an Encapsulated Nano-Electrolytes formula. This means the transportation of electrolytes into the cells is more efficient and allows for rapid rehydration. With this different formula, Speedlyte can be absorbed in spite of a reduction in villus cells as a result of diarrhea. According to Speedlyte data, this new formula has been shown to reduce unscheduled intravenous rehydration therapy by up to 19% and reduce scheduled intravenous rehydration therapy by up to 73%.

Speedlyte comes in an orange flavor and is relatively low cost for a 20 ounce bottle through Amazon.
It is also made without any artificial flavors, colors, or sweetners and contains a low amount of sugar. This is important as sugar and artificial sweetners increase diarrhea and sugar content must be monitored for those with Diabetes, such as my mother. My mother was approved by her Nephrologist to drink two bottles a day. However, due to the size of bottles my mother opted to drink one per day. She drank a bottle throughout the day rather than in one setting. She was not fond of the orange flavor but did report it tasted better when it was chilled. I, however, did not mind the orange flavor and found it to more appealing than other orange hydration products. I was advised by a Speedlyte representative that the orange flavor is being improved and additional flavors are being developed for future release.

Overall, my mother was satisfied with the reduction in her dehydration symptoms while utilizing Speedlyte and found it to be a "good product". Also, as an added benefit the representative advised me that some Medicare beneficiaries are able to receive Speedlyte through their Medicare benefits for a monthly supply.

If you're interested in learning more about Speedlyte or trying this product for yourself, you can find more information at Einsof Biohealth and purchase through Amazon.