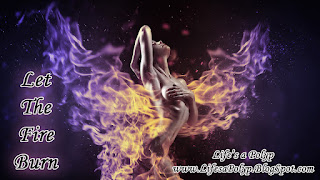 The last seven months have been an incredibly difficult, transformative, and freeing period that is truthfully just starting. For when such a process begins, it can't be confined to a mere few moments in time - not if you submit yourself to the process. For when you submit, the transformation truly begins and it can become a lifelong, marvelous journey.

I fought a new bout of depression this year; that old friend of mine that likes to seep into the depths of my mind and heart and squeeze my very life in its cold, dark claws as it whispers to me, gently bidding me to join its ranks of peace and tranquility. A peace only found in the abyss of death, where there is absolute nothingness. A nothingness that consumes you to the point that there is no pain, worry, or grief. It's a peace that I once was honored to experience briefly and so it calls to me, reminding me of a time long, long ago.

But as I struggled against its calls, strong though they may be, I resurfaced. And not only did I resurface but I found a new appreciation for my life, for my time on this earth. I found a strength within me I never knew was there. A strength that is greater than that which I harness for and through my health battles. A strength that is beyond the physical. All my battles have primarily been against the physical realm. Fighting for my physical life, my physical body against the physical effects of my rare disease and the tolls it takes on me.

I have been pushed past my breaking point yet once again, only this time it wasn't because of my health. I was thrown into a fire and though the flames continue to surround me, I am beginning to see the traces of smoke filtering in amongst the flames. In being pushed to my limit by multiple individuals and situations this year, I'm being transformed and am continually finding new limits, horizons, and restrictions to break. I am by no means done with this personal growth, this new found freedom. The flames continue to do their busy work of burning my outer layers to allow my soul within to shine and to shine brightly. And thanks to these flames, I am happier with myself and more free than I have been in years.

These flames schooled me in dealing with what life and others may throw at you and how to stay afloat. I'm learning to let go and not worry. To take care of myself rather than waste my time and energy on worrying about how others are going to affect me. That is not the same as no longer caring about others. Rather, it's a freedom from the restraints we often allow others to place upon ourselves.  No longer allowing others to control us and our actions and moods. 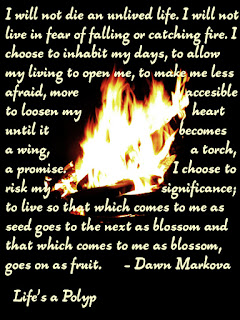 Instead of trying to figure out what life will be like and what the right direction to take is because of someone else, try setting your own life goals and going after them with tenacity, intensity, and fierceness. No longer letting another control your life's direction will break you of the restraints and life will realign. You will become focused. With that focus, you will discover what is most important to you and establish your own standards for living. Finding yourself, what you deem important, and the satisfaction of independence in your pursuit will lead you to intense happiness and freedom. Levels of which you wouldn't know when you allowed yourself to cower to the standards of others rather than your own.

Realize you can and you will survive on your own without others. I never thought of myself as an independent woman until this revelation was nearly forced upon me. I became overfilled with strength and pride with such a powerful revelation. A lot of us see ourselves as independent solely on our ability to financially provide for ourselves without assistance from another. Although this is a caveat of independence, it doesn't end there. There is so much more to being independent than simply being financially independent. Do you feel able to survive the loss of those dearest to you? I've survived the death of countless individuals I greatly loved and admired but what about the physical loss, the emptiness that can be summoned when we lose someone physically and emotionally though they remain living? My world felt as though it was crashing in around me with such non-death losses. I felt as though I had lost a part of me and perhaps I had in the process of giving a part of me to those I have loved. When forced to the brink though, you will learn you can survive any loss regardless of the severity and difficulty. This doesn't mean you become cold-hearted. Far from it, you simply are able to harness your inner strength rather than solely relying on the strength of others.

No longer care what others think of you. When you lose respect for someone, that person's opinion no longer means anything anyway. Don't waste yourself on those who have already lost your respect. Cherish those who are true to you - those who are supportive, loving, caring, and there with you through the brightest and darkest times of your life - not those who try to create dark times, tear you down, harm you with their malicious intent and manipulations, leave you without explanation. Don't let yourself succumb to the power of others, especially when it is a harmful power. You don't have time for that nor should you.

Don't take the dangerous, personal issues of others on as your own. People will attempt and succeed at betraying, manipulating, deceiving, and harming you. The reasons for others to inflict such pain on another is deep seated within them. Stop trying to decipher the reasons behind their actions. Their reasons don't need to make sense. Their reasons are just that, theirs. Not yours. Do not take on more pain simply because another is engaging in harmful behavior towards you.

Do what you've longed to do but was too scared to commit to previously. There is immense freedom in letting your inhibitions go and doing what you've always wanted to do. Perhaps you refrained yourself because you worried about judgment from others, didn't consider it proper, or didn't think you had it in you to attempt much less complete. Forget that and jump in. I've learned that there are personal challenges our spirit is drawn to for whatever reason. Your spirit gravitates you toward such challenges and won't let you forget about it - even if you bury it for years under fear and inhibitions. If you feel that unceasing tug, your spirit is speaking to you. Sometimes it speaks to you softly, the action may be small but it appeals to you at a deep level. Other times it screams at you out of no where, forcing your attention even if you remain refrained. Let your shield down, accept a self challenge, and let yourself be free.

Whatever the source is for your fire, it will be a long process of adjustment and coping as your outer layers become scorched and the pain sears your soul. Turmoil presents itself with a variety of emotions and stages, often sending you bouncing back and forth amongst them all repeatedly before you are finally able to find your footing enough to begin to walk a more level path through the flames. As the outer layers begin to crack, forcing you to think your mind will crack as well you will want to speed along the process and jump to the end simply to lessen your pain. It's okay that this is a lengthy process for it is through this lengthy process that you are provided the opportunities to discover more about yourself, healing and freeing yourself from the captivity of the world. The pain will be unbearable at times but the rewards of true independence and freedom are vast. Let yourself fully feel all your emotions. Surrender to them as you claim the strength that lies deep within your being. Strength you had yet to harness before and burst from the flames as the warrior you were destined to become.
Posted by Jenny at 7:35 PM