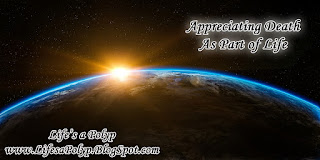 Through my own near death experiences and years of losing loved ones, death has become a far too familiar part of my life. Others view me as having a death orientation and perhaps this is true. My own health scares have left me unafraid of the passage of this life into the next realm and I've become skilled at saying goodbye to those I love. One can't help but gain this skill when the majority of your friends and acquaintances are those with chronic illness - groups I've come to surround myself with personally and professionally. I can't count the number of family, friends, and patients I have lost over the years since I was almost 2 years old.

I traveled across country with my parents to say our final goodbyes to one of my great uncles. We resumed our yearly visits 6 years ago and as my great uncle's health began to decline and he transitioned from his own home to a nursing home, we began preparing with him. He was becoming closer and closer to his 100th birthday. He was tired and he was ready. Each year we wondered if he would live to see his next birthday and each year he continued to surprise us as well as himself with his longevity. The time was finally nearing. We surrounded him and attempted to comfort him during his bouts of pain. We voiced our love and understanding to him, letting him know that it was time to let go. As we parted with him on the second night, I told him that I hoped he would find peace that night. He turned his head and looked up at me with a knowing look in his eyes. I smiled, fighting back tears, and told him how I loved him and lightly kissed his forehead one last time. That night he passed into the other realm. At age 99, four months shy of his 100th birthday, he finally gained the peace he desired for so many years.

Death is a learning process for those preparing to enter the other realm as well as for those left behind. Someone facing impending death over a period time is given a gift of self understanding - learning the depths of one's fears, hopes, regrets, personal beliefs, and gaining wisdom and insight into the meaning of life and what is truly to be held sacred and important in life, rather than the fluff. This can be a time for intense self reflection that doesn't necessarily come easily to everyone until forced to consider one's inner depths. 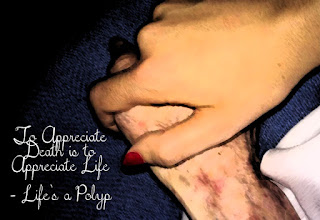 No matter how many times we go through the process of losing a loved one -  saying our goodbyes or worse yet the inability to say goodbye due to no forewarning and contributing or participating in the funeral services - it never becomes an easy process, simply a familiar process. We know what to expect, we learn how we obtain closure and grieve, and we learn tricks to make the process and funeral arranging easier and smoother. We learn our own preferences for our own services and what is needed for arrangements. We learn about ourselves just as much as we do about others during such proceedings. Individual personality traits become transparent - whether good or bad traits.

Through death, we are able to appreciate life. I gain closure as I grieve through the sharing of life stories of my loved one. Through this process, I'm reminded of the wondrous times of my loved one's life and fond memories together. When I think of my loved one, I don't think about their death instead I think of the stories shared.
When one of my aunts who helped raise me unexpectedly passed away, I don't remember her death and service so much as I do the weeks and months following her death as I spent multiple evenings throughout the week with my parents, aunts, and uncles sharing family stories as we sorted through her belongings. As my grandfather's body gave way to stomach and esophageal cancer, I spent as many days as possible with him. When I recall his passing, I'm not reminded of his death but of being near him, falling asleep next to him watching television in his big over sized bed like I did so many times throughout my childhood.

Death and the events following one's death are not occasions for overwhelming sadness but rather a time to celebrate and honor our loved one. A time for family and friends to come together and honor the individual's life with stories so that the individual may live on in the hearts and memories of those remaining.

Colon Cancer Awareness Month always leads me to reflecting upon my own family's experiences with colon cancer. I've mentioned be...