Norms of the Unhealthy 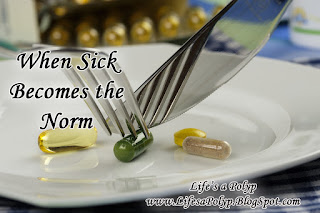 Do you remember the last time you felt normal? How long did your new health changes become normal for you?
I remember the time that I felt normal, it was when I was 9. But don't remember what it's like to feel normal, no recollection...I imagine it would be no pain, eating wouldn't be bothersome, butt burn wouldn't exist but those are just speculations, not memories. Perhaps if I hadn't been so young when my life changed I'd be able to remember. But that's the thing, I don't remember much of anything from before my health changed. I have a few memories of events and people, but not many and they're more like flashes. So it makes sense that I wouldn't be able to remember feelings and sensations.

Trying to remember what normal is makes me wonder how long it took for my current health to become the norm for me. I'm further drawn to this wonderment as I've been dealing with neck pain from a bulging disc, muscle weakness and a joint issue for the last 4 months. The pain from the disc (which has since cleared) and the remaining muscle and joint issues hit me much, much harder than I would have ever expected. I've been experiencing pain daily in my neck. Now, I'm accustomed to my daily stomach pain. But this neck pain, I can't imagine becoming accustomed to. The neck pain varied greatly from dull to sharp, coming and going unpredictably without warning. The constant gnawing and unpredictability left me in bouts of depression and frustration, crying daily for periods of time.  I kept asking myself how in the world did my stomach pain and related symptoms ever become normal for me!? How long did it take and how long would the neck pain take to become normal for me. I was dumbfounded. I don't remember depression and anger over the stomach symptoms, that was directed toward the ileostomy and my medical providers. It's quite possible I was depressed by my health symptoms too, but that's not what I recall in those blurry memories.

I don't think I can fairly say that the ileostomy was ever normal for me, as I've addressed before I never accepted the ostomy but my physical feelings I did come to accept at some point. I don't think twice about having stomach pain or other bothersome symptoms anymore. They're an inconvenience and annoying but I expect them. I know certain foods will exacerbate my symptoms and yet I also know that I also can't accurately predict my symptoms at the same time. And although I don't prefer to feel sick the majority of the time, I'm oddly okay with it at this point. I don't usually feel frustrated or downhearted by it, this is my life. There's no way around it. Now how sad is that!? How long does this attitude take to develop, to be beaten  into everyday reality and acceptance without hesitation or rebuttal? I'd like to know how long this process took to wear me down to such an apathetic view. Is that what true acceptance is? I'm not sure and yet I remain unmoved to rebel, I utterly accept that this is my life and at this point, I know no difference. Either way, I've found a way to cope with the daily struggles and I'm grateful for that. Because the daily struggle of my neck is completely wearing and draining. The last 4 months have been the worst months I've spent in a very long time.

And to think, a muscle, joint and disc issue is what brought me to my knees emotionally after such a long physical and emotional fight with my FAP that I feel I had overcome 6-7 years ago as my health stabilized. Perhaps that's it, with my health stabilized for such a period, I've become unaccustomed to coping with additional health issues. I was no longer fighting daily extremely bothersome symptoms but instead was enjoying the gradual decline and eventual plateau of my health symptoms rather than the ongoing valleys I experienced for several years.
This is similar to a previous discussion  of my difficulty to willingly subject myself to medical tests and procedures now, I've had a sense of freedom from the rigorous course of tests we often are subjected to. I've broken free for the time being and emotionally I can't make myself go back there, whereas previously I was stuck there...what was another test, I was already emotionally raw without anytime to retreat into a post battle wound licking or recovery. But I have now for 7 years, I've been free from the constant barrage of medical harassment. My coping has suffered as such, I'm at a fairly peaceful place in my life and I'll go back to the medical nightmares kicking and screaming before I accept those again as normal.
Posted by Jenny at 2:44 PM