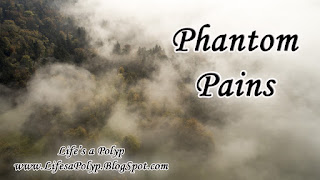 I hate when I have phantom stoma pain! I just hate it. I've lived without an ostomy for over ten years now and I still getting the feeling that I still have an ostomy, stoma and all. Last night I spent half the night in a shallow sleep rubbing at my last stoma scar because it felt like I had raw skin around my "stoma". My sleep was shallow enough that although I didn't fully wake every time I touched my scar, I did stir enough awake to realize what was happening. And the most frustrating thing is even though I could tell what reality was, the phantom pain wouldn't stop so every so often it would hit me. I even was having dreams that I still had an ostomy. Had I been in a deeper sleep I would have truly believed I still had an ostomy, it was that vivid of a pain.

This isn't a one time occurrence unfortunately. Every few months my body reminds me what once was. As if I could forget anyway!  In high school during a rough health patch I dreamt I had an ostomy still and it was so vivid that I was an emotional wreck all day, I even awoke in a panic crying. I was terrified that my straight pull thru would be taken down and replaced with an ostomy once again. That all I had worked toward had been for nothing.

I've had other phantom pains before too. I'm reminded of the pain of a central line, I can't even tell you how many I've had it's been so many. The worst was during that stent in high school when I had a central line for six months due to having to be on TPN because I wasn't allowed to eat or drink for months on account of a hole in my intestine. I finally had the central line removed when it was literally hanging by only one stitch, the rest had pulled free and were no longer there. Oh that was a constant pain, not sharp but a background pain that you couldn't forget about as the central line was slightly pulled and released with movement. To this day I still have that pain if I touch or something irritates those scars or if I start to think about it too deeply.

The same happens with my arms and hands where I have blood drawn or IVs placed. Thought or touch rings those memories and they're reawakening with phantom pain of needles.

The pain we've experienced is imprinted upon our bodies and our memories without realizing it or our consent. We are not to forget the trials we've endured. Our bodies can take us back to that moment without notice in a heartbeat. Perhaps that's not completely bad though. We remember and so we can join with others and help others endure their trials as well.
Posted by Jenny at 6:42 PM