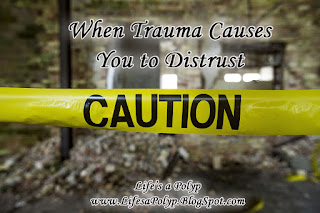 The betrayal of someone once trusted with your life is so significant it often is emotionally and mentally scarring. In Medical Angels and Demons, I shared experiences of blessings and torture with various medical providers I've had throughout my life. The betrayal of trust I suffered by providers at the children's hospital I attended as a child continues to haunt me to this day.

I am extremely suspicious of other medical providers until I am convinced that the provider is competent and has my best interests as a patient at heart. I am filled with regret, pain and rage when recalling experiences with these past providers and my trust with other providers has been tainted. My life would be completely different if I had a competent surgeon, if my care hadn't been allowed to be primarily directed by those 3 residents, if the emergency room team had been thorough and attentive. Had the surgeon listened to my parent's concerns my ostomy wouldn't have been placed on the wrong side allowing for my intestine to wrap around itself and other organs, if the emergency room team hadn't sent me home with the simple diagnosis of being a whiny child then the extent of dead intestine could have been prevented, if those residents hadn't been charged primarily with my care rather than the surgeon, perhaps more testing and treatments would have been completed for better, more directed care and treatment. The pain inflicted and level of distrust between these past providers is so great that it is deeply ingrained in association of the hospital and its affiliates as well. I would never be able to work for this hospital unless absolutely required to in order for survival. I would never be able to bring myself to taking any child of mine to the same hospital, even though it is a children's hospital that is supposed to be great with children and advanced in the care and treatment of children.

Never estimate the stupidity of this hospital or the individuals who work there.
A few months ago I suddenly realized that I should be aware of who the residents are that were assigned to me as a child so that I may prevent unknowingly becoming associated with them.
I can't even trust the hospital's medical records department to provide copies of, guess what, medical records. In my quest to uncover the residents' names, my requests for medical records from the children's hospital has been refused twice. The first time I was told that the request was illegible, even though the medical records staff could read my name, phone and address well enough to call and mail me a refusal. When questioned about the illegibility, I was then told that I must not have completed all the required information. My second request has yet to receive any communication whatsoever, even though the records department advises that records will be provided within 5-7 business days. I've resolved myself that I will be forced to go through my doctor's office and dig through my old charts in order to find the information. I would have done this originally but I thought it would just be easier to go through the hospital's medical records directly. How I was wrong. It'll be easier to sift through my multiple, overflowing charts at my doctor's office myself than to have anything sent to me from the hospital's medical records department.
I also think poorly of the hospital and its affiliates for charging individuals money to visit admitted patients, attend doctor appointments, or for patients to park at the hospital while receiving care. Yep, you read that right. I understand a hospital not wanting non patients or hospital visitors parking in the hospital parking lots, but there are other ways to deter illegitimate parkers.

This month I plan to start delving through the old records at my doctor's office to uncover the truth of the identities of those residents and protect myself from potential future harm for those individuals. I hope that those residents are now competent practicing doctors, but I would never be able to bring myself to trust them again with my health and life.
Sometimes we must make extra effort in order to protect ourselves and help calm our neurosis developed during chronic illness and medical traumas. This is a survival tactic and with such efforts, we are more apt to survive.
Posted by Jenny at 6:41 PM