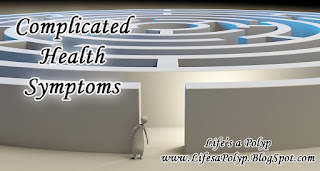 Because of this distinction I become ever so slightly vexed when I'm asked if such and such issue is because of my FAP. I suppose you could technically consider symptoms as such, but I don't and I'm not going to blame things on FAP disease that aren't directly caused by it. Doing so is like milking the disease and falsifying information. FAP sucks and is a horrible disease, but by itself it isn't necessarily such a god awful disease. Yea you're guaranteed to develop cancer at some point, but caught early enough is easily treated and likely will only require surgery as treatment option. I view desmoid tumors, although benign, as the 2nd worst symptom or effect of FAP because of the effects on other body parts and organs, especially if the tumors are inoperable.
I don't know why I'm touchy about this, but for whatever reason it irritates me and I prefer the distinction to be acknowledged. To me, it's a simple distinction that doesn't need to be muddied or misidentified. That doesn't help matters, it doesn't help the public understanding of FAP and it doesn't help the individual with FAP. FAP isn't a well known disease, it's a rare disease and the majority of people have never heard of it. Misguided information won't raise awareness, just myths.

Awareness is important for public knowledge, higher rates of screenings to detect cancer early, and increased funding for research of the genetics, treatments and cures. There isn't a whole lot known about FAP in comparison to non-rare diseases and there isn't very much research on FAP. If we want this to change, we're going to have to work together to increase educated awareness and provide valid reasoning for research.
Posted by Jenny at 9:26 PM